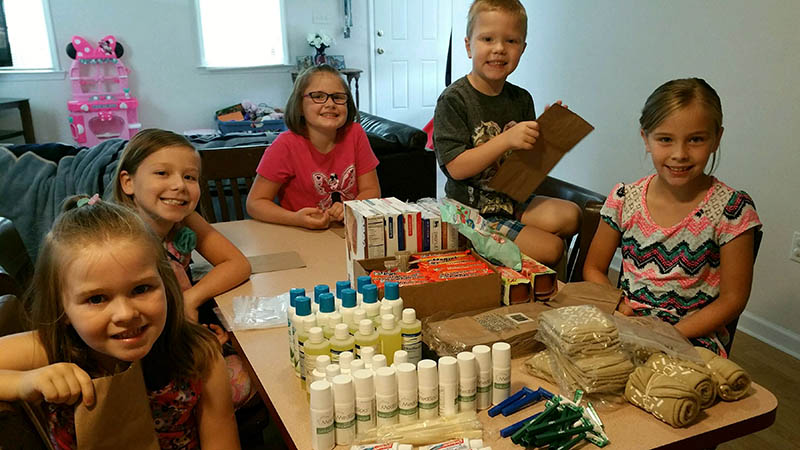 In no set order, Madison Amanda, Madison Grace, Leyla, McKayla, Tyler and Hayleigh Pallone of Franklin make blessing bags, which include toiletries and socks. These were recently distributed to homeless people in downtown Richmond. -- Submitted

FRANKLIN
Robert and Joy Pallone of Franklin can say they’ve have been blessed with six children — Madison Amanda, Madison Grace, Leyla, McKayla, Tyler and Hayleigh. But long before any of them came into this world, the Pallones agreed that among the many things they wanted to teach any of their offspring was to help other people who are not as fortunate as they have been in life.

“As much racial hatred and everything as there is, we want to teach them the right way,” said Robert, who has been a correctional officer with the Department of Corrections for seven years. “I’ve witnessed and learned not to judge.” 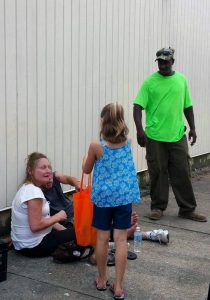 One of the Pallone girls takes bottles of cold water, some food and a bag of toiletries to some people in need. — Submitted

This past summer, the youngsters made what they called blessing bags, which included toiletries such as toothbrushes, toothpaste, deodorant, soap, razors and socks. In addition to giving out food in bags, bottles cold water were also distributed.

Robert said he knew many homeless people sleep on the streets of Richmond, particularly when a program offers free dental appointments in the summer. So the Pallones took their cargo downtown and got out to distribute. The 20 bags of food quickly ran out.

“There were a lot more people than we anticipated,” he recalled.

After that experience, the children were moved to want to do more.

“They loved it,” Robert said, adding that they came up with the idea of giving out coats and blankets as well as hot meals for their next project.

A coat drive is scheduled for Saturday, Nov. 18, from 9 a.m. to 2 p.m. in the parking lot at Paul D. Camp Community College. Gloves, scarves and sweaters will also be welcomed. Joy Pallone said that all donations will be washed before giving them out, and distribution will be done in December.

This is where the public comes in the picture. The Pallones created a gofundme page and have set a target of $500 to help realize their goal where the hot meals are concerned.

The sense of empathy that the couple has also developed stems, in part, from a personal tragedy they experienced about four years ago when their son, Tanner, had died from a birth defect known as anencephaley, which according to the Centers for Disease Control and Prevention, causes an infant to be born without parts of the brain or skull. The causes of anencephaley are not known.

“From that experience we were in a very bad place, very depressed. Based on our heartache, we can’t judge why they [the homeless] are on the streets. That could easily have been us,” Robert said, adding that the children “know not to take things for granted.”

To learn more and contribute to the Pallones’ project, visit www.gofundme.com/PreciousMomentsofGiving.