Riverkeeper report: Hooters on the Nottoway 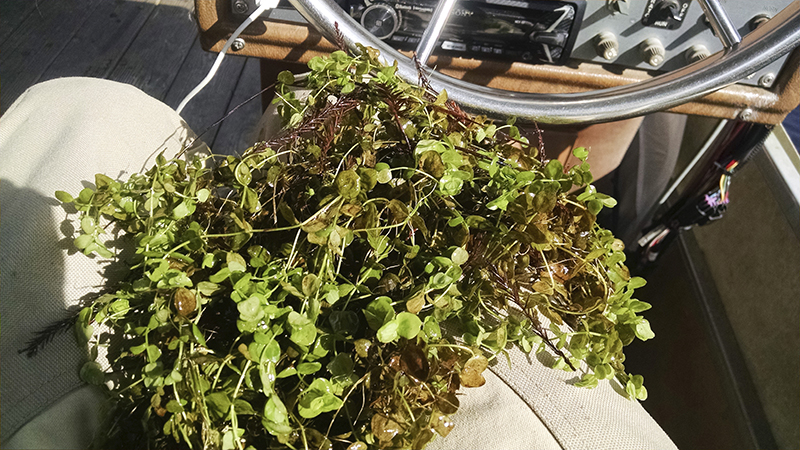 Shade mudflower has been found growing in the Nottoway River. As yet, the Riverkeeper has not determined if it’s a nuisance plant like the alligator weed found in the Blackwater River. -- Submitted | Jeff Turner

Spirit of Moonpie and I spent the 25th through the 27th on the Nottoway below Round Gut. Air temps ranged from 39 to 70 degrees. The river was 65 degrees, stagnant, nasty and low. Trash was not bad, I picked up only a few pieces. I was surprised at how clean Round Gut was!

The fishing was not too great. I only caught four cats on limb-lines the two nights that I fished. That is terrible. I also caught a few bream, but they were all small. The bass fishing was just fair, I caught three 12 inchers and hung a 3- or 4-pounder out of a treetop, but it did a spectacular forward summersault and spit the lure out. Never seen a bass that big do a summersault, I don’t think.

This is the time of the year I always make my Brunswick stew, so I harvested three squirrels as part of the traditional stew I make. It only took 30 minutes of hunting to get the job done due to the fact there the squirrel population out there seems to be very robust indeed this year.

Part of the mission of this trip was to look for the alligator weed in the Nottoway. I am happy to report that I did not see any on the section of the river I was on. I did not, however, look at the very lower part of the river. There is another aquatic weed that seems to be doing a great job of taking over the river.  According to the Department of Conservation and Recreation, it is a rare plant called shade mudflower, it does not appear to be rare here anymore. I’m not sure if this is going to be a problem or not. I have noticed it is making its way upriver pretty fast. I cannot find out any information about its effects on rivers, etc., so I guess it’s going to be a wait-and-see thing. Already there is so much of it the plant could never be eradicated even it if was a problem.

Certainly over the past 50 years of me being on the Blackwater and Nottoway and 17 as Riverkeeper, I have seen some unusual things. Thankfully, there is always another “first” and so it was on this trip. Moonpie and I were just fishing along when I started hearing the owls hooting. It’s not unusual to hear some during the day occasionally.

Moonpie said, “Those hooters sure are loud today ain’t they?”

“Yea,” I said, and noticed the hooting sound was rapidly getting closer. I turned in the direction of the cacophony and ‘bout fell out of the boat. A huge owl, wings outstretched was heading dead at us and HOOTING while in flight! It passed 15 feet overhead of us while hooting, which caused some strange sonic holographic sound to swirl around us disorienting me for a second or two. I have never in my life seen an owl calling while in flight. As it passed overhead I looked right into the River Spirit’s eyes, and I understood the message.

“You’re welcome,” I said as the winged wise one disappeared into the swamp. “It has been a great pleasure serving you as Riverkeeper on the two rivers we call the Nottoway and Blackwater.”