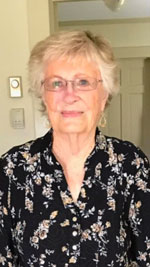 Mrs. Bryant was born in Hertford County, North Carolina, and was a daughter of the late Milton Harrell Worrell and Laura Mae Whitley Worrell Pope. She was also predeceased by two brothers, Edward Worrell and George Bennie Pope Jr.
Mrs. Bryant was a member of Rock Church of Franklin.
Left to cherish her memory are two daughters, Betty Mulder and husband, John, of Courtland, and Nancy Carl and husband, Jim, of Aurora, Colorado; two grandchildren, Bethany Casados and Andy Garcia; three sisters, Ruth Culbertson and Alice Mansfield, both of Suffolk, and Laura Eva Holland of Edenton, North Carolina; and several nieces and nephews.
A special thank you to her Rock Church family and especially Mark and Tina Scott for their love and support.
The funeral will be at 2 p.m. on Monday, Nov. 6, in Wright Funeral Home, Franklin, with Pastor David Dillon officiating. The burial will follow in Hollywood Cemetery, Newsoms.
The family will receive friends from 7 to 8:30 p.m. on Sunday in the funeral home, and suggests that memorial donations be made to the Rock Church of Franklin.
www.wrightfuneralhome.org.