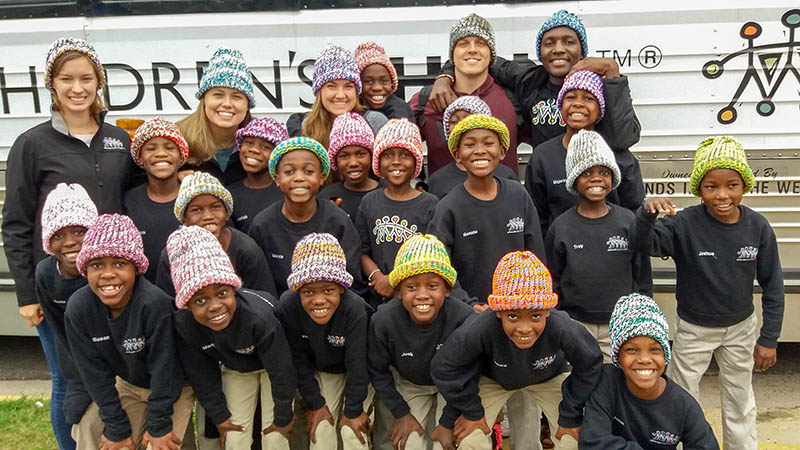 Keira Carnie, in back at far left, with the African Children’s Choir. After seeing the ensemble perform in her home country of England Carnie was so moved to change careers and become an adult chaperone for the youngsters. -- Courtesy | Keira Carnie

COURTLAND
Of course when the African Children’s Choir visits Western Tidewater this Saturday, the youngsters won’t be alone. With them will be adult chaperones, one of whom came to the job by leaving her career at the time.

Keira Carnie of England is a volunteer leader, and since April has been traveling with the 19 children — 10 girls and nine boys from Kenya and Uganda — and seven other adults, two of whom are former choir members themselves.

“I actually saw the choir last June in 2016,” Carnie said in a phone interview. “I was a teacher in high school, and fell in love with children. I was impressed by how much care they get, the longevity of the choir and how well the children perform.”

She submitted an application and took all the other necessary steps to rearrange her life once accepted. The first stop for the choir was in Raleigh, North Carolina, and they have been traveling and performing in the Midwest and South. They travel on a big bus that carries everything, Carnie said.

In addition to performing in small and medium-sized venues, they’ve been to large cities such as Chicago and New York. Just a few weeks ago, everyone got to see Niagara Falls.

“You see everything through their eyes as well,” Carnie said of what she described as an extended family. Carnie mentioned she and the adults are referred to by the children as “aunties” and “uncles.”

Many of the youngsters, who range in ages from 8 to 10 years, come from broken homes. Perhaps they have only one parent or are even orphaned.

According to www.africanchildren’schoir.com, the organization came about through human rights activist Ray Barnett, who felt called on to help children who had been abandoned or orphaned during Uganda’s civil war in 1984. He and a team of other concerned adults were reportedly inspired by the singing of one boy, and from there the choir began.

The latest tour concludes in Texas this December, and she’s not yet made a decision about what do afterward.

“I’ll still got a few months to go. I gave up everything and I’d love to carry on,” said Carnie, who hopes to at least forever have a role in the children’s lives.

The show on Nov. 4 will be in the auditorium of Southampton High School, and the free performance begins at 7 p.m.; doors open at 6:30 p.m. Their visit is presented by the Franklin Tri-County Alumnae Chapter Delta Sigma Theta Sorority Inc.

According to soror Angela Artis, Franklin Tri-County’s Arts and Letters Committee is responsible for promoting a positive image of African-Americans and providing artistic and cultural outlets for chapter members and our local community through the mediums of music, dance, drama, literature, and poetry. The committee promotes worthwhile cultural endeavors through its Red Carpet Events, such as the African Children’s Choir.

“The children melt the hearts of audiences with their charming smiles and delightful African tunes, accompanied by ethnic instrumentation,” stated Artis. “The program features well-loved children’s songs, hand clapping, traditional spirituals and contemporary tunes. Nearly every performance is concluded with a thunderous standing ovation. A marvelous by-product of the concert is the inspiration the music brings to virtually every listener. In spite of the tragedy that has marred their young lives, the children are radiant with hope, musically gifted and wonderfully entertaining.”

She added that the primary goal of the choir is to raise awareness of the need of destitute and orphaned children in Africa and to raise funds for continued development and support of the African Children’s Choir Programs. The choir’s international educational endeavor provides unique training for the children.

Once choir members have completed a concert tour, they will return to their homelands with the tools necessary for bettering their future.