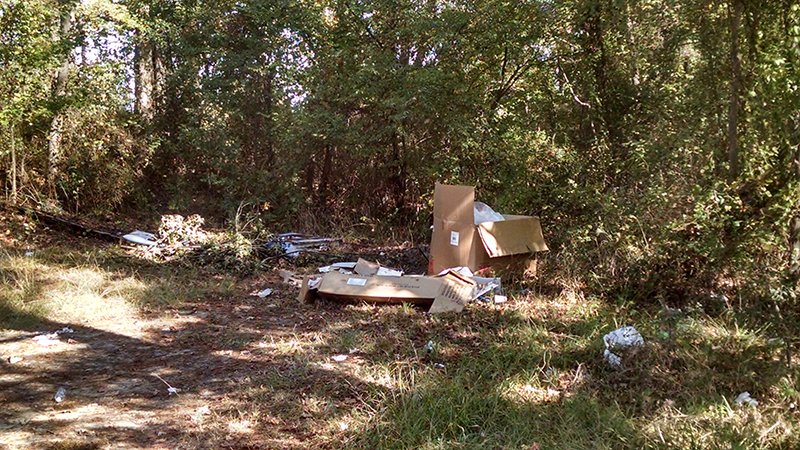 The Riverkeeper found this dumping of trash at the Route 189 boat launch. -- Submitted | Jeff Turner

Spirit of Moonpie and I spent the 19th through the 21st on the Blackwater below Franklin. Air temps ranged from 46 to 75 degrees. The river was 65 degrees, stagnant but clear and low. Trash was not too bad. I picked up about a half o’ bag full.

Moonpie critter patrol was slack again this trip except for the regular players and, in fact, it was pretty dead out there really. We did see either a couple of bald eagles or the same one twice since it was at the same location both days. We also saw a couple of deer, but that was pretty much it.

The fishing on this trip was fair; I caught a few largemouth and Jacks on topwater. I did not fish for catfish. In fact, I spent most of the time GPSing alligator weed locations. I believe we have 16 in the database now. All of the weed is located from Franklin downriver to the mouth of the river so far as I can tell. I also believe all but about five or six sites can be eradicated. The remaining sites will just have to be controlled forever. Now I have to go look and see if it is in the Nottoway as well. I hope not, but I should know in about a week.

What STILL is occurring along our rivers is a dumb, sub-human species of people that are continuing to create illegal dump sites along our rivers. After all the time and effort International Paper spent to clean up the Rt. 189 landing earlier this year, someone has dumped a truckload of a mess there again.

I’m not going to clean up this location anymore, nor am I going to ask any other group to do it anymore. It’s time for the landowner to take control of this problem and either keep it cleaned up, catch the bad guys or cable the place up and post it. I know the landowner despises this dumping is happening and is probably as frustrated as I am. However, we have cleaned the place up for the past 17 years and I have had VDOT post No Dumping signs and I have alerted the county and VDGIF. I’m done.

Sometimes the landowners just have to take responsibility of these issues and join the never-ending battle to keep our shorelines clean on the two rivers we call the Blackwater and Nottoway.