FRANKLIN
Seth Konkel may reside in a rustic area of Virginia, but he has his sights set on the big league. The 18-year-old left-handed pitcher for the Paul D. Camp Community College Hurricanes has a plan to carry him until that day arrives.

“I want to pursue a career in becoming a sports physical therapist,” he said. “I also want to work hard at baseball and try to get drafted into the MLB.” 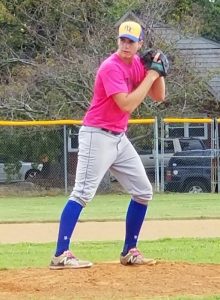 Seth Konkel winds up for a pitch during the recent Play in Pink benefit game to raise money for breast cancer research. — Submitted | Stacy Pauley

Konkel had opportunities to attend other four-year colleges for baseball and academics, but landed in Franklin—not a far cry from the rural environment of his Exmore home on Virginia’s Eastern Shore.

“[Other colleges’] tuition costs were very high, and most were not Christian colleges,” he said. “I was looking for a college that would fit my criteria, and PDCCC was perfect.” Konkel cited that affordability, recruitment for the new baseball team, and the proximity to The Rock Church of Franklin— where he is an active member—all played a part in his assessment.

“I have always heard that the first two years of college at a four-year school are usually made up of general studies classes, so to me, attending a community college is a wise decision financially,” he said.

Konkel is also the recipient of the 2017-18 Herbert W. DeGroft Commonwealth Legacy Scholarship (CLS) at PDCCC, an honor awarded to a graduating high school senior through the Virginia Foundation for Community College Education. He is in his first semester of General Studies classes that will eventually lead to his bachelor’s degree in Health Sciences.

“By receiving this scholarship, my parents will not have to save money to help pay for my classes, books and supplies,” he said. “I have two brothers and two sisters. Coming from a big family, any help I receive is a huge blessing.”

Konkel has been enamored by baseball since he began playing at 8 years old. But it was an injury to his pitching arm, which benched him for four months that led him to embrace the epiphany of using the experience to assist others.

“I began physical therapy at Children’s Hospital of the King’s Daughters in the beginning of fall 2016,” he recalled. “Having gone through the therapy program, I became interested in being able to help athletes like myself become healthy and come back better than ever.”

Graduating from Mighty Warriors Homeschool with a 3.7 grade point average, Konkel is an Eagle Scout who has been active in the community for nearly six years through the Boy Scouts of America. In addition, he played baseball for about the same length of time for the worship team at The Rock Church of The Eastern Shore.

A CLS is selected every year from each of the 23 institutions in the Virginia Community College System (VCCS). As a Commonwealth Legacy scholar, Konkel will mentor future scholarship recipients and participate in statewide events, such as the Student Leadership Conference, scheduled for Nov. 10-12. Scholars will also be featured on the VCCS website and in other VCCS publications.

This year, the scholarship will provide $3,500 for a full year of tuition, books and fees— all possible due to the generosity of Wells Fargo and additional funding available from VCCS.

While Konkel has already been accepted to Lee University, he is also interested in completing his application for Liberty University. He intends to play baseball wherever he enrolls. Current and past coaches have confirmed the 6-foot-3, 200-pound pitcher’s potential to play the sport professionally, but Konkel knows that there are greater factors at work that will determine his outcome.

“I am letting God lead my life, and whichever direction He leads me is where I will go,” he said.