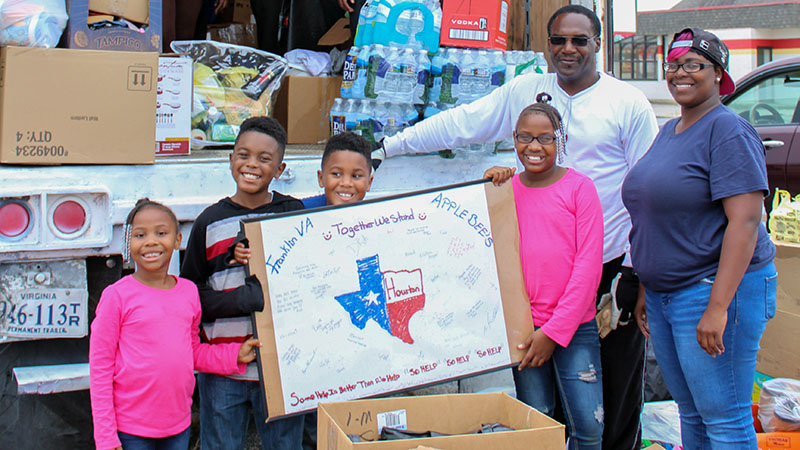 Ryan Sumblin and Quanisha Murphy of Franklin, standing in the trailer at right, helped to organize a collection of food, water, clothing and other supplies for victims of Hurricane Harvey in Houston, Texas. This past Saturday, they and other supporters, helped to load a tractor-trailer, which leaves on Thursday for a distribution center in that city. Among the helpers in front are Malasijah Brown, Zaveon Reid, Zyeire Reid, Makaylah Brown, Ricky Sykes and Kierra Reid. On in the trailer are Greg McLemore and Tamiya Reid. -- Stephen Cowles | Tidewater News

FRANKLIN
Recovery work continues for the people of Houston who endured Hurricane Harvey in September. Aiding that effort is a group of Franklin residents.

This past Saturday, Ryan Sumblin and Quanisha Murphy were among those individuals helping to load a tractor-trailer with food, water, toiletries, clothes and even books among the numerous supplies.

Sumblin said that Murphy and Alice Widmeyer and he were already friends on Facebook, and the subject of the hurricane victims came up in their online conversations. Actually, it was more a case of great minds thinking alike. They each posted their concerns simultaneously. From there, they were inspired and made their plans for organizing a collection.

“We wanted to do something for the folks in Houston,” he said, recalling what Franklin suffered after Hurricane Floyd in 1999.

They put the word out asking for contributions that month, and the response was generous. He figured that at least 100 cases of water, 25 boxes of non-perishable foods and 500 bags of clothes were collected locally.

The obstacle of finding transport soon presented itself. Fortuitously, they saw a TV segment about Grove Baptist Church in Portsmouth also calling for donations.

“We reached out and collaborated,” Sumblin said. “A church member already owned and operated a tractor-trailer and was willing to take our supplies.”

Once they were done in Franklin that afternoon, the vehicle was returned to the church where other people would load more donated supplies through today. The tractor-trailer is anticipated to arrive by next weekend and taken to a distribution center.

“We would just like to thank everybody,” said Sumblin. “We’re very proud of the turnout.”

As an aside, he said a free Community Fun Day will take place this Saturday, Oct. 22, from 2 to 6 p.m., at Armory Park. A cookout and fun activities are planned.