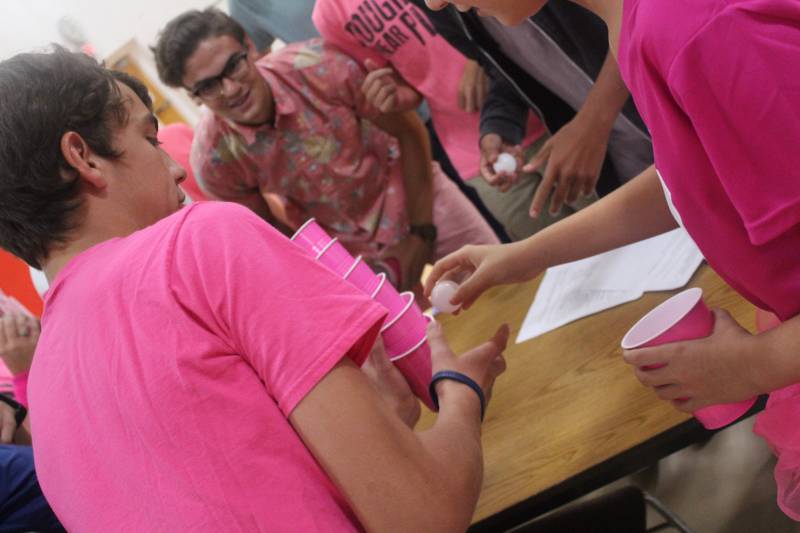 COURTLAND
The Lady Indians’ JV and Varsity volleyball teams recently hosted Windsor in the annual Dig Pink Game. The Dig Pink game gives both teams players to raise both awareness and money for breast cancer, a cause that is near and dear to our hearts. The players play in honor of or in memory of people they know who have battled or are battling breast cancer.

The volleyball team sponsored a fall sports battle on Oct. 5, the day of the match during school. Students purchased tickets to watch the fall sports battle. The volleyball team competed against the football team, cheerleaders, golf team, cross country team, the band, field hockey team, fall baseball team and a teacher team in 13 “Minute to Win It”-inspired games. The teachers won, but most importantly, over $1,100 was raised to be donated to the Virginia Breast Cancer Foundation. The volleyball players also raised money raising that total to over $1,800. 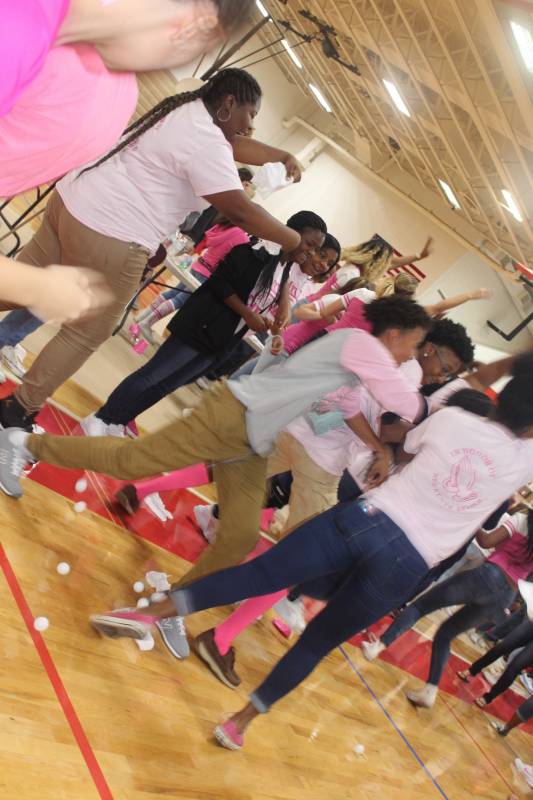 The Band team celebrates its win.

Both JV and Varsity Lady Indians defeated Windsor in the match up.

Standouts for JV included: Mallory Francis with 7 kills; Kinna Magette with 3 aces and 8 assists; Ayanna Bell with 4 aces and 3 kills; and Shelby Shaffer with 1 ace and 3 kills.

The Lady Indians improved their record the week of Oct. 10 with three victories. The first was a varsity only match with a win over regional opponent Colonial Heights in straight sets (25-20, 25-9, & 25-17). Standouts for the night included: Jacey Bunn had 2 kills and 12 digs; Madeline Burgess had 3 aces and 10 digs; Hannah Bradshaw had 4 kills and 3 digs; Emma McClelland had 5 digs and 5 kills; Madison Wright had 3 kills and 17 digs; and Emma Drake had 3 aces, 10 kills, and 13 digs. 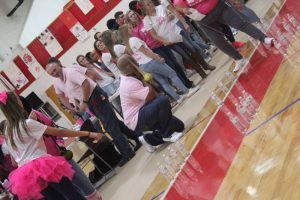 Sharone Bailey, in front, being cheered on by the teacher team.

Standouts for JV included: Mallory Francis with 2 aces and 8 kills; Shea Lindsey and Ayanna Bell both had 1 ace and 3 kills; Shelby Shaffer had 3 kills; and Kinna Magette had 8 aces and 18 assists.

Varsity standouts for the evening included: Emma Drake had 3 aces, 14 kills, and 12 digs; Hilary Newlon had 3 aces, 2 kills, and 3 digs; Madison Wright had 8 kills and 7 digs; Amani Gary had 2 aces and 8 digs; Hannah Bradshaw had 6 kills; and Ashlyn Edwards had 3 kills, 2 aces, and 23 assists..

Every year Park View is our toughest battle, but the girls enjoy the challenge and get up for this game like no other. We hope to face Park View at least one more time this year in the district tournament and possible another time in the regional tournament. The varsity Lady Indians remain undefeated both in the district and the regionals with a regional record of 14-0 and an overall record of 17-2. The week of Oct. 14 we travel to Sussex on Tuesday and Franklin on Thursday. We return home on the 24th to face Brunswick and the 26th is senior night against Surry.

We hope to host the district tournament on Oct. 28. The highest seed will host the event for the top four teams in the district. The following week will begin regional play. The Lady Indians are on top of the district and region.