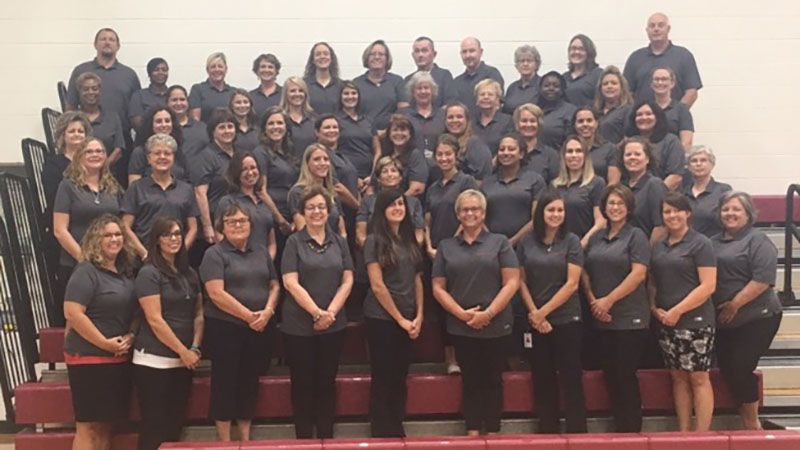 The staff of Riverdale Elementary School, which recently was named a Distinguished School by the Virginia Department of Education. -- Submitted | Will Melbye

COURTLAND
To use Meherrin Elementary Principal Debra Hicks’ description, she and all other principals of Southampton County Public Schools were “elated” to report that their respective sites are fully accredited, according to the Virginia Department of Education’s final SOL results. The progress report was made during the school board’s regular meeting on Monday evening.

Riverdale scored 79 percent, 84 percent, 100 percent and 86 percent, respectively. Speaking of Riverdale, Principal Will Melby had the pleasure of formally announcing that his school was awarded the Board of Education’s Distinguished Achievement Award in alignment with the Virginia Index of Performance.

That VIP recognizes schools and school divisions for the achievement of excellence goals which are established by the governor and Board of Education, and provides incentives for continuous improvement.

Southampton High scored 89 percent, 94 percent, 90 percent and 86 percent; the graduation and completion index was 88 percent (the benchmark at 85 percent,) respectively.

Principal Allene Atkinson noted that SHS has now been accredited for 16 consecutive years.

Dr. Gwendolyn Shannon, superintendent, said, “How proud I am of the staff, parents and community, collectively. We just achieve more as a team. Riverdale really did do a phenomenal job. They’ve really, really done a fantastic job.”