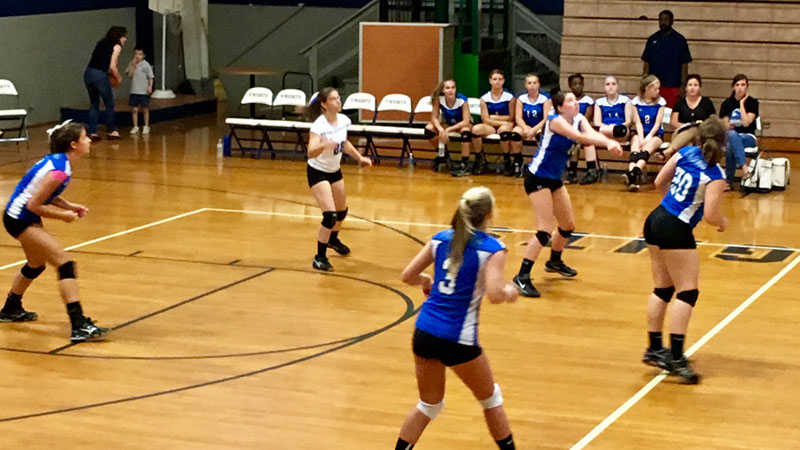 COURTLAND
The Southampton Academy Raiders have had a successful few weeks of conference play. The varsity team entered this week on a five-game win streak and continued that with an away, non-conference win at Ridgecroft and a home win against Kenston Forest School, the top team in the conference. These wins bring the Raiders to an overall record of 12-3 and 6-1 in conference play.

The Varsity Raiders played very well against Richmond Christian last week. After dropping the first set, 19-25, the Raiders rallied to win the next three sets (25-18, 25-17, 25-3). Standouts from this game included: Avery Pope with 13 kills and five unassisted blocks; Haley Lowe with 22 assists; and Kamryn Poole with six kills and an incredible serving run in the final set.

The Raiders then traveled to Tidewater Academy on Sept. 28 where they came away with another conference win (25-17, 25-13, 15-25, 25-17). Junior Haley Lowe recorded 15 assists for the night, and Sophomore Ashlynn Pearce helped the team with 6 kills.

Tuesday’s game against Kenston Forest was a battle for first place in the conference, and the Raiders came away with a big win after beating the Kavaliers in straight sets (25-19, 25-11, 25-22.) Highlights included: Haley Lowe with 22 assists; Kellie Ferguson with six digs in one game alone; Ashlynn Pearce with seven aces and eight kills; and Avery Pope with multiple unassisted blocks. Sophomore Kristen Holt went on an impressive service run in the second game, serving 12 straight points.

When asked about the game, senior Macy Harrup said, “We played as a team and communicated very well, which led us to our exciting win over Kenston Forest. It was not just one person that lead us to our win, it was everyone on the team and the coaches too.”

The JV Raiders won both games last week defeating Richmond Christian (25-16, 25-12) and Tidewater Academy (25-8, 25-3.) They were also able to pull out a tight, three-set victory over Kenston Forest Tuesday night at home. These wins bring their overall record to 11-2 and their conference record to 5-1.

The Raiders are at home again on Thursday, Oct. 12, as they face off against Blessed Sacrament Huguenot at 6 p.m.

REBECCA HARPER is one of the volleyball coaches at Southampton Academy. Contact her at 653-2512.