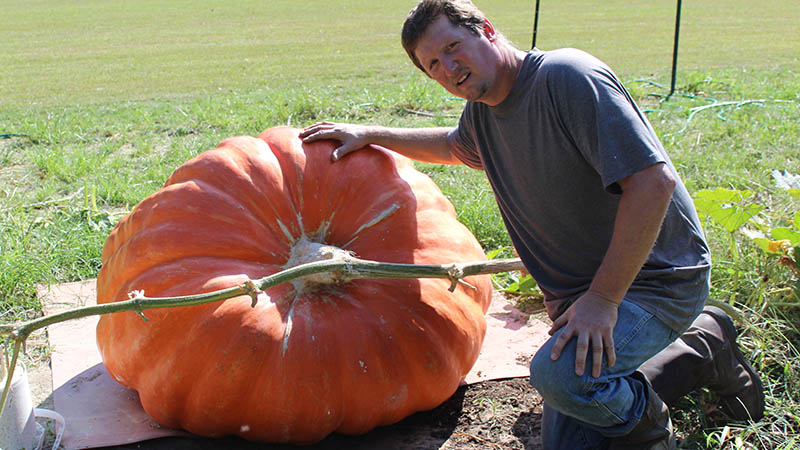 Ricky Atkins of Blackhead Signpost Road, who was featured in The Tidewater News last year for his hobby of growing large produce, transported his latest crop to the State Fair in Doswell on Saturday. This is his second consecutive first-place win in the pumpkin contest.

Atkins explained that state fair rules require that each person submit only one pumpkin per year, but since he received help throughout the growing season from his fiancee, Brenda, his cousin Robert, and his future sons-in-law, he put a pumpkin in each of their names. Brenda and Robert both received third, while his sons-in-law received fifth and ugliest.

Atkins also grew two giant cantaloupes about two months ago, each weighing approximately 32 pounds, and one other giant pumpkin weighing between 800-900 pounds, which he lost to rot before it could be harvested. His “autopsy” of the lost pumpkin revealed its skin had grown to be 18 inches thick all around.

His first-place pumpkin this year was grown from the seed of the 2014 State Fair winner, which weighed in at 1,203 pounds and belonged to Hank Houston of Spotsylvania County. Houston holds the state record for his 2015 entry at 1,340.7 pounds. The world record is 2,600 pounds and was set in Germany. Atkins estimates that his first-place winner might be the biggest ever grown on the eastern coastal region of Virginia, though the State Fair has seen larger pumpkins from the northern and western regions.

Atkins explained that to get his pumpkins to their maximum size, he feeds then two to three times per week. When magnesium is mixed with water and added, it helps to harden the pumpkins’ skin. Liquid nitrogen is good for photosynthesis and potassium is what helps them gain weight.

Last year, he sold his largest pumpkin to Cox Farms in Centreville for about $1,100 for use in their “Pumpkin Madness” Fall Festival finale. He is considering doing so again, or possibly taking the pumpkin to the North Carolina State Fair in Raleigh after the Virginia fair is over, to try to recoup some of the cost of growing it.

He added that each year there is always the possibility of losing his investment before the fair.