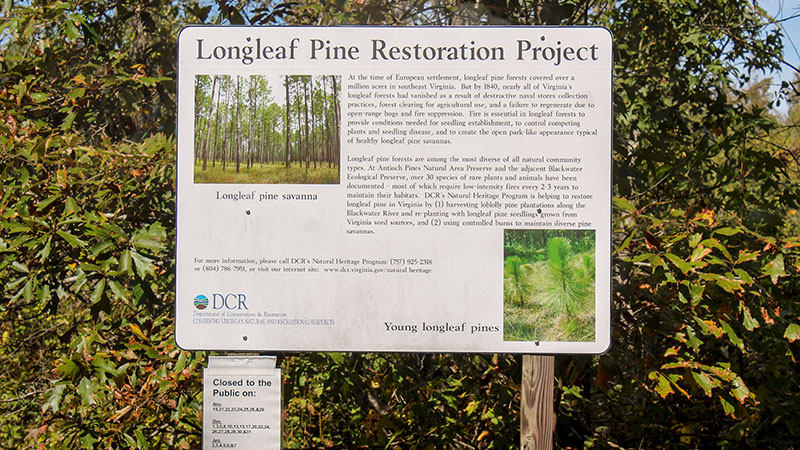 ZUNI
Two Virginia Department of Conservation and Recreation projects in Isle of Wight County intended to help restore native longleaf pine populations recently received grants from the Virginia Land Conservation Foundation. Gov. Terry McAuliffe announced the list of grant recipients on Tuesday, which include a total of 23 projects throughout the commonwealth and $4.23 million in funds.

The first Isle of Wight conservation project to receive grant funds is an expansion of the Antioch Pines Natural Area Preserve, located in Zuni. The DCR was awarded $419,900 to assist in the purchase of 142 acres bordering the existing preserve. A press release from the governor’s office states that this plot of land is important as a “smoke buffer” to support an active, state-run controlled burn program. Forested areas on the tract are considered to have “very high” value by the Virginia Department of Forestry’s Forest Economics Model, and also include a high priority area for longleaf pine restoration. The property has approximately 8,549 feet of streams and 13 acres of wetlands, and supports common wildlife game species. It will also eventually provide habitat for declining species such as the northern bobwhite quail, whose populations have been dropping since the Civil War era.

“Longleaf pine is a native pine species; it is quite possibly the ‘pine that built Tidewater,’” said Scott Bachman, senior forester for the Department of Forestry’s Blackwater Work Area, which includes Isle of Wight County, Southampton County and the city of Suffolk. “It was used extensively in the ship building industry during the sail era. It was used for wood as well as pitch, tar and resins used to seal the hulls.

“It can live to be very old but is not easy to regenerate. It has become reduced in numbers in the forest due to the difficulty in getting a new forest of longleaf started. Loblolly pine is much easier to get started so it replaced longleaf as a preferred forest management tree.

“We in the Department of Forestry and our partners, DCR, the Nature Conservancy and others, have dedicated time and funds to help people to return this tree to the forest and the forest products stream. We are in the very early stages of returning longleaf to the environment. This parcel is well suited for the tree and can perform well there, while loblolly pine may not do as well.”

The second project involves the protection of Isle of Wight’s Blackwater Scenic River Corridor. The DCR was awarded $57,761 to help protect 165 acres, making up two miles of river frontage along the east bank of the Blackwater River, a state-designated Scenic River. When combined with the adjacent Antioch Pines Natural Area Preserve, nearly five contiguous miles of river frontage “viewshed” along the east bank of the river will be protected.

According to the governor’s office, the project would protect forests the Department of Forestry has deemed to be of “very high” value, as well as the national champion overcup oak (Quercus lyrata.) All riparian and bottomland forests present will be protected in perpetuity, thus contributing significantly to the preservation of this scenic and wild waterway. This will also better enable recreational use of the river. About half the tract is an upland sandy soil ridge, which will be restored to longleaf pine as part of an ongoing partnership with VDOF and several other agencies and organizations.

Both projects will be administered by the DCR. Assistant County Administrator Don Robertson said he was unaware of any involvement by Isle of Wight County’s government in either project.