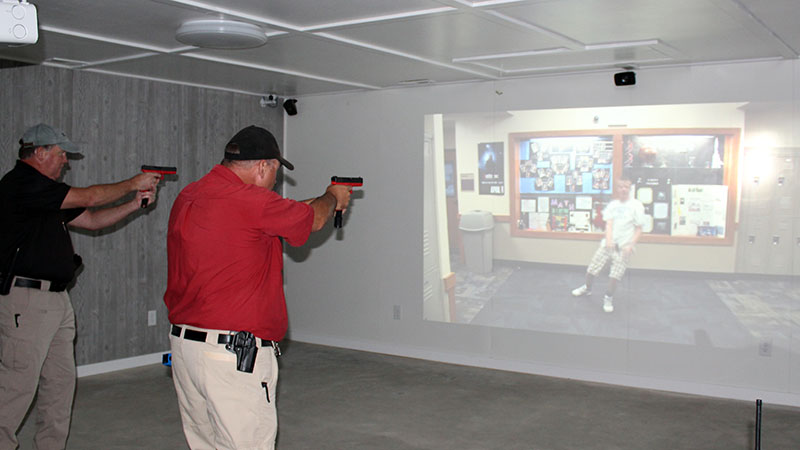 Southampton County Sheriff Jack Stutts, left, and Sgt. Greg Griffith, lead firearms instructor, interact with one of 800 scenarios made available through the new MILO range now available to the office.

CAPRON
To shoot or not to shoot. That is the question that nearly every person in law enforcement has to ask himself or herself on a regular basis. In Southampton County, the deputies and investigators now have new tools that can better prepare them for the field, including how to decide if or when lethal force is required.

The outdoor range features a 100-yard automated target system. Previously, the department used a 50-yard range near Courtland. In addition to having a longer range for firing practice, there are targets which can turn — never the same way twice — via an automatic system. No local tax dollars were needed. The sheriff said that was purchased using seizure money, which is cash collected during investigations of illegal drug operations.

“The project began when Southampton County Board of Supervisors member Randolph Cook met me out here a year ago in August,” said Stutts. “Using Cook’s engineering skills, we laid out the base for the backstop and staked it out. Cook prepared a scaled drawing and monitored the construction progress the entire time.”

The sheriff added that the Department of Corrections and the Virginia Department of Transportation helped in building the earthen mound, which is 100 feet long, 12 feet high and includes 45-foot angled extensions on each end. In addition to using inmates, an excavator, bulldozer and a couple of dump trucks were also needed.

Overlooking that range is a small building that houses the MILO Range, which is a simulator program that uses laser-operated weapons for target practice and 800 interactive scenarios. The latter can range from domestic disputes to traffic stops. There are also options for pepper spray and tasers. Review options are also available. Stutts said he heard that Hanover County was the first in Virginia to be using MILO and requested permission to see it. Impressed, Stutts decided that could well serve his office and therefore county residents. Before, the deputies had to go to Crater Criminal Justice Academy near Petersburg. To schedule training and then driving an hour to get there was not practical in his view.

“Now this valuable training, so important in today’s world, is right here and has become a big part of our training regimen,” he said.

All new appointees to the sheriff’s office will be required to train with locally even before practicing with real ammo outside.

“We can work out all the bugs here,” said Griffith, who has been the lead firearms instructor for the past four to five years. “It’s a big deal to me. [Training] starts right here. It has everything an officer needs to know.”

That also means a big savings on ammunition. Stutts said that 50 shells for a .45 caliber costs $14 per box.

Speaking of money, the sheriff repeatedly emphasized that as with the outdoor range, no local tax dollars were used for getting this program. He credits the Camp Family Foundation for enabling the department to obtain MILO as well as construct the building to house it.

The Franklin Police Department is already using the facility, and Greensville Sheriff’s Department has also asked about it.

Although it’s still a little early to see an immediate payoff, the sheriff is confident that all of the improvements will make a difference sooner than later.

“This facility will serve local law enforcement for many years to come,” Stutts said. “Our deputies will be better trained than ever thanks to the simulator system and ready to meet today’s challenges. You simply just cannot teach the decision-making and “shoot/don’t shoot” scenarios the simulator provides in a traditional range setting. My sincere thanks to those who made this possible.”