Searching for answers on my boyhood river

On the slow-moving river on which I grew up, the Nottoway, there are mesmerizing cypress trees that date back hundreds of years.

I kayak that river as often as I can and never tire of wondering at those trees, now more than ever before. Those trees, as my cousin Mike and I noted the other day, have survived some hellacious floods and a whole lot else. In these days in our torn-asunder land, I draw hope from those trees and my paddles with Mike.

Mike voted for Donald Trump for president. I didn’t. 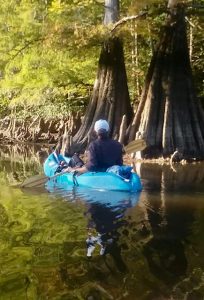 John Railey takes in some ancient cypress trees on the Nottoway in Courtland. — Courtesy | Mike Joyner

He’s a year or two younger than me and, after experiencing a layoff, commutes an hour each way from Courtland to a big city to work in a factory. I’ve been lucky enough to have never been laid off, although plenty of better journalists than me have been crushed by that.

I can understand Mike’s frustration with the national economy, and what he sees as the failure of the Democrats to turn it around. As we paddle, Mike and I talk about that and Trump’s first months in office. We disagree a lot in a fun way, never letting it get too heated.

Before it does, we turn to other subjects, memories of growing up together and talk of what our childhood friends are doing now. We remember the old days when his late father ran a fish-and-bait store in downtown Courtland that was a community gathering spot. Our downtown thrived in those days before a bypass took much of the business away, as has happened in so many small towns.

We talk about that and other things upon which we agree, such as the cause of the Civil War was slavery. Some of our mutual friends still argue that wasn’t the cause.

Anonymous but brave soldiers from our county were sucked into that rich men’s wrong-headed war.

Our county, Southampton, is ground zero for many of the racial issues with which our country still wrestles. Dred Scott, of the infamous Supreme Court decision of 1857 that ruled blacks could not claim citizenship, spent his early years in slavery in our county.

Gen. George Thomas, who grew up in our county, joined the Union in the Civil War. His courage earned him the nickname of “The Rock of Chickamauga,” even though his disgraced sisters back home reportedly turned his portrait around so that his visage faced the wall.

Another general rooted in our county, Billy Mahone, gained fame in the Battle of the Crater at Petersburg as a Confederate, only to years later renounce the Southern cause on the floor of the U.S. Senate in which he served.

Mike and I talk about these contradictions and about the Nottoway Indians for which our river is named. Such talks between two boys who’ve known each other most of their lives might seem a small thing.

But since Trump’s win, we’ve seen friends battle it out on Facebook and other venues and part ways. Such anger, and I’ve been guilty of it too much, bottles up bad stuff inside you, that, for all we know, can lead to cancer.

God help us. There was a time when we Americans tried to agree on a shared heritage and learn from it.

When Mike and I paddle these last warms days of the season, we’re constantly trying to figure out the path ahead, whether there will be enough water to float us past the sandbars.

I worry about water moccasins, the poisonous snakes we call “cottonmouths.” Cottonmouths can be stupidly curious and, when they’re in the mate in the spring, they can get aggressive. But truth be told, the snakes aren’t that big a threat.

Maybe fear of them is as groundless and silly as the fear, or at least distrust, so many of us have of each other these days.

Maybe we should worry more about finding the path ahead together.

Maybe there are sustaining markers like those old cypress trees to guide us there.

JOHN RAILEY, who grew up in Courtland, is the editorial page editor of the Winston-Salem Journal, which originally published this column.