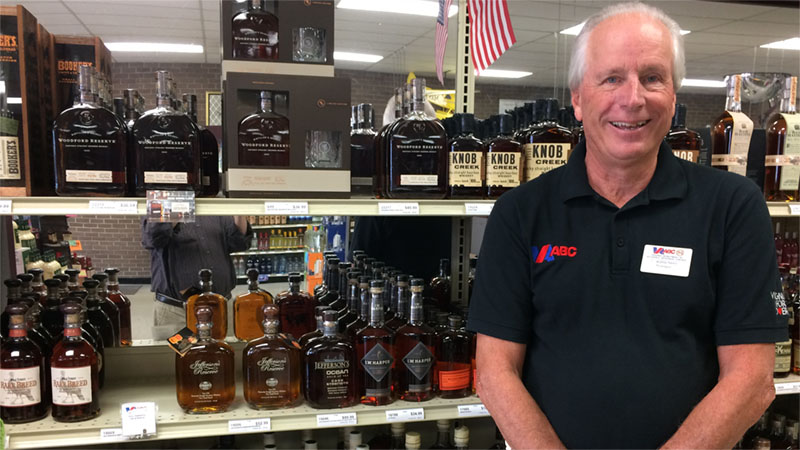 Rubin Story has been the manager of the Virginia ABC store in Franklin for 42 years, and his retirement becomes effective after Saturday. -- Stephen H. Cowles | Tidewater News

FRANKLIN
What started out as as temporary job for Rubin Story became a full-time 42-year career with the Virginia Department of Alcoholic Beverage Control, better known as ABC. While it’s been fulfilling work, the Franklin native has decided to retire; Saturday was his last scheduled day of work.

Story said he was working in the printing department of the old St. Regis Paper Co. across the road before a layoff compelled him to look elsewhere. His sights landed on the ABC store for what he thought would be only a part-time position. Two years later, he was promoted as an assistant manager, and even worked as such in Suffolk for a while. Then two years after that, Story earned the promotion as full-time store manager.

In that position, he was responsible for customer service, getting the right staff, making sure there’s plenty of stock and checking inventory.

He’s certainly learned not only the ropes of the business, but also an appreciation for spirits even if it’s on a sometime basis. Woodford Reserve is his bourbon of choice.

The biggest change that Story said he’s witnessed is the store functioning more as a business, even though it’s state-controlled. Come January, though, that’s anticipated to change from “an authority into an agency,” according to the website. That’s supposed to make Virginia ABC “more flexible and efficient as as retailer, wholesaler and regulator of the sale of distilled spirits.”

His immediate retirement plans are simple.

“To fish as much as possible,” Story said with a laugh, adding that the Nottoway and Nansemond rivers are two favorite places for him. The biggest fish he ever caught was a 20-pound catfish.

Also on the itinerary will be travels with his wife, Kay. The couple will have more time for their daughter and son-in-law, Angela and Steve Pittman, and grandson, Parker.