Spirit of Moonpie and I spent the 21st through the 23rd on the Nottoway below Delaware. Air temps ranged from 60 to 82 degrees. The river was 75 degrees, stagnant, nasty and smelled like dead fish. I picked up two pieces of trash the entire three days I was out there. There are not many rivers in Virginia where one can claim that I bet.

The fishing on this trip was fair. I did great with the bream catching plenty on tiny crank baits and even caught a few bass while doing so. However, when I purposely fished for bass I caught none … so go figure. I did fair on the catfish catching a 6-pounder and a nice 19-pounder the first night. The second night I was flat skunked, I didn’t even have a good hit!

On the Moonpie Critter patrol we saw a juvy eagle, which are truly ugly creatures in their adolescence.

We finally got a decent shot of a Kingfisher on film and a couple of snakes. One of which was an orange belly I caught swimming the river that I really screwed with. I put the pontoon boat between it and the shore in gear, which made the snake keep swimming right beside the boat so I could take pics. Finally it figured out what was going on and got pissed off and started trying to cut across the pontoons, leaping out of the water about a foot at a time. That was pretty impressive while swimming really fast. For some reason none of those pics turned out … guess that was snake karma.

We also saw a bunch of wild turkeys fly across the river and, of course, once I got the camera booted up they were gone. Still didn’t get a pic of the flying turtle. That is now a high priority ‘till it gets too cold for them. I’m hoping as it eventually gets cooler, the turtles will not jump off their logs so fast maybe letting me get closer and find that turtle that has big air under it. You can go the Blackwater Nottoway Riverkeeper Program Facebook page to see the latest pics of the river. 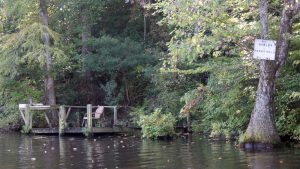 So as I was riding around on this trip I saw the remains and almost remains of a bunch of places along the river where people once had fish camps, as I call them. On the Nottoway there used to be a couple of floating tin shacks, one just outside of Round Gut and one in Simmons Gut. Nothing but a frame of those exists today. I actually have been inside the one that was in Simmons Gut one night back in the 1980s when I brought the occupants a 9-pound catfish. There were also a couple of these floating tin shacks upriver from Franklin on the Blackwater back in the 1970s.

Sadly, the owners faded away and then the idiot vandals shot the places up and hastened their demise. There is/was a nice land shack at the curve at Point Seine Beach, which still remains today, but I haven’t seen anyone there in 20 years. Little by little, Mother Nature is reclaiming this once very nice camp. There are two or three places in the curve upriver from Rt. 258 Bridge. One is a trailer on the hill that has been there since I was a kid. I think the trailer might have even been replaced once. I have never ever in over 50 years on the river seen anyone there.

Then there is Bowles Honey Hole, the little pier there is now ‘bout to be reclaimed by the Nottoway. I would have loved sitting in that old metal chair and catfishing at night, and I’m sure that was done many a time. I know people die or move on, or lose interest I guess. I would love to have such a place along the river like any of these seemingly forgotten fish shacks and can see me being a permanent fixture sitting there, like an old cypress tree.

I can only imagine the wonderful fish tails and fun times these old fish shacks witnessed on the two rivers we call the Nottoway and Blackwater.