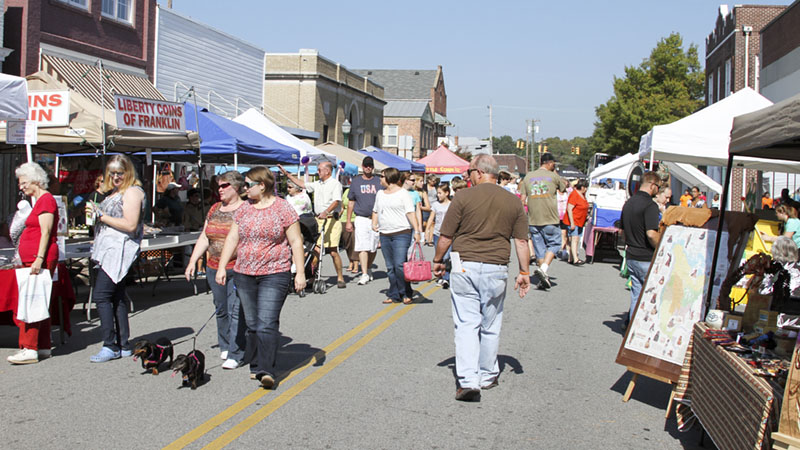 The Street Festival is a popular feature of the annual Fall Festival in downtown Franklin. -- FILE PHOTO

According to Dan Howe, executive director of the DFA, the goal in relocating all children’s activities, to include the inflatable bounce houses, from their former location on Second Avenue to Barrett’s Landing was to put them closer to the petting zoo and pony ride exhibits near the farmer’s market pavilion. This way, all children’s activities are within one to two blocks walking distance of each other.

“We’re hoping this Kids on Main takes off, and we’ll add to it as it grows,” Howe said.

Festivities will begin on Friday, Oct. 6 with the annual block party at Barrett’s Landing from 6 to 11 p.m., featuring DJ Larry Williams of WFOS 88.7 FM from 6 to 7:45 p.m., and The Pizazz Band from 8 to 11 p.m. However, there will not be a car show or fireworks this year. Admission to the block party is $5 with children ages 6 and under free.

The DFA will also announce this year’s winners of the scarecrow contest on Friday, in which local business owners decorate scarecrows attached to the lamp posts downtown to represent their businesses.

Saturday activities will begin at 10 a.m. and include live music, food and retail vendors, Franklin’s Market on Main, arts and crafts, and Kids on Main. Admission to Saturday’s festivities is free for all ages.

“We have pretty close to 100 vendors,” Howe said. “We got some traditional vendors people have been used to in the past, and we have some new vendors this year. It looks like, if mother nature is nice to us, we’ll have another great Fall Festival this year.”

Bands playing at the Farmer’s Market stage on Saturday are bluegrass musician Chris Newsome from 10 a.m. to noon and country/rock artist Justin McCurry of Smithfield from 12:30 to 4 p.m.

Howe added that this will be the DFA’s 35th annual Fall Festival. Saturday’s events are rain or shine. Friday’s block party typically has a rain venue but Howe said that none has been chosen yet.

More information on the Fall Festival can be found at www.downtownfranklinva.org/festival.