As of  5 p.m., the NHC reported that “the center of Hurricane Jose was located near latitude 37.2 North, longitude 71.3 West. Jose is moving toward the north-northeast near 8 mph (13 km/h) and this general motion is expected to continue into this evening. A turn to the northeast is forecast to occur by Wednesday morning. 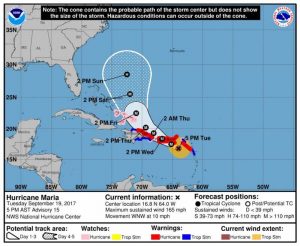 “On the forecast track, the center of Jose is expected to pass well offshore of the Delmarva peninsula later tonight, pass well to the east of the New Jersey coast on Wednesday, and pass offshore of southeastern Massachusetts by Thursday.

“Maximum sustained winds are near 75 mph (120 km/h) with higher gusts. Little change in strength is expected tonight, but Jose should begin to gradually weaken on Wednesday.”

Hurricane Maria, though, also has the agency’s attention. Also at 5 p.m., “the eye of Hurricane Maria was located near latitude 16.8 North, longitude 64.0 West. Maria is moving toward the west-northwest near 10 mph (17 km/h), and this general motion is expected to continue through Wednesday night. On the forecast track, the eye of Maria will move near or over the U.S. Virgin Islands tonight, cross Puerto Rico on Wednesday, and then pass just north of the coast of the Dominican Republic Wednesday night and Thursday.

“Reports from an Air Force Reserve Hurricane Hunter aircraft indicate that maximum sustained winds are near 165 mph (270 km/h) with higher gusts. Maria is a potentially catastrophic category 5 hurricane on the Saffir-Simpson Hurricane Wind Scale. Some fluctuations in intensity are likely during the next day or so, but Maria is forecast to remain an extremely dangerous category 4 or 5 hurricane as it moves near or over the Virgin Islands and Puerto Rico. Slow weakening is expected after the hurricane emerges over the Atlantic north of Puerto Rico and the Dominican Republic. Hurricane-force winds extend outward up to 35 miles (55 km) from the center and tropical-storm-force winds extend outward up to 140 miles (220 km).”