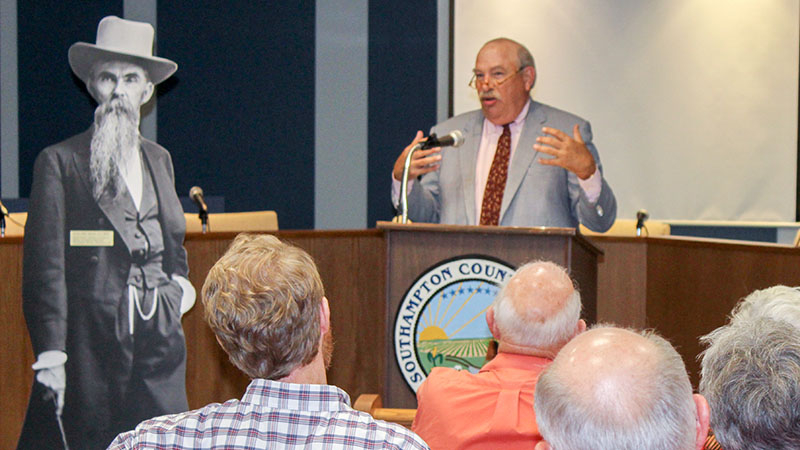 COURTLAND
Regional historian John Quarstein was the guest lecturer to 36 people on Sunday afternoon for a program about Western Tidewater’s place during the Civil War. His appearance at the Southampton County Board of Supervisors’ meeting room was sponsored by the Board of Directors of Mahone’s Tavern and Museum.

Introduced at the start as “an outstanding resource,” Quarstein immediately gave some background information on the start of the conflict. Hampton Roads, he added, was a strategic area with the James and York rivers serving as thoroughfares to send supplies. Railroads also played their part.

The Confederacy initially lacked a navy owing to a lack of men, Quarstein noted. Though he later touched on the significance of the creation of the CSS Virginia — sometimes also known as the Merrimack — the first ironclad warship for the South. That would later go on to sink two major Union warships.

The Joint Expedition against Franklin on Oct. 3, 1862, was a combination of the North’s Army and Navy against the Confederacy’s troops, but the Union found itself outmanned and had to pull away. Quarstein said that Franklin could have been destroyed had a pincher movement been executed.

The speaker also referenced the Blackwater Line, which was a stretch of earthworks created by Confederates where they had troops stationed. You can see the historical marker at Barrett’s Landing in the city. Quarstein said that much of the line’s fortifications still exist, although on property belonging to IP or at the Pretlow Farm.

Southampton County’s William Mahone, who served as an officer in the Confederacy, went on after the war to earn a fortune through railroads and roads. He also served as a senator for one term.

“You have great history here in Southampton County,” Quarstein summarized, and noted the significance of the courthouse. He described it as not only historical, but also beautiful in its architecture.

“We take our history for granted,” he added.

Asked to speak on the controversy about Confederate statues, Quarstein said he’s “appalled” by the idea, and said that the people who fought during the Civil War are officially considered American veterans, and they deserve to be treated and respect as such.

Mahone’s Tavern is open to individual or group tours by appointment. Contact eblythe4@verizon.net.

The place will also be open on these dates and times: