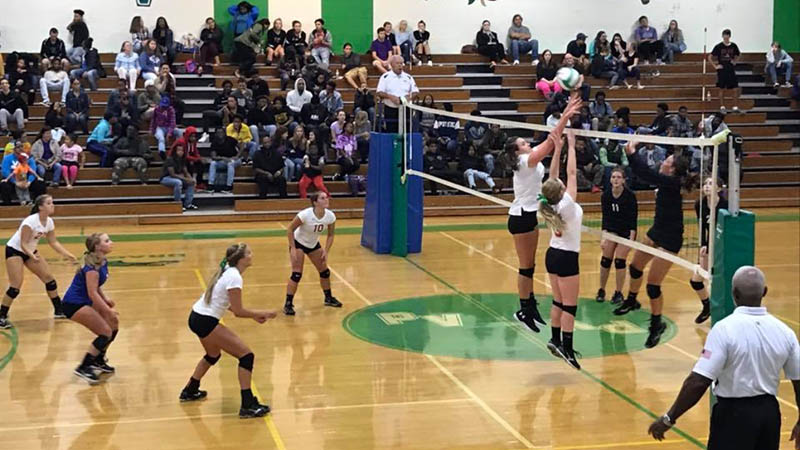 The JV team started out very rocky against the Dragons in the first set, but once they settled they took the second set. They came up a little short in the third set, but put up a good fight. This was the first loss of the season for the JV team and they have a 2-1 record.

Some standouts from the night: Kinna Magette had 16 assists and 2 kills; Shea Lindsey had 4 kills; and Mallory Francis had 8 kills.

The varsity game was in front of a packed gym with lots of spirit from both sets of fans. This is definitely the most exciting game in our district and the girls really get up for the intense competition.

Tuesday is what we work so hard for and train for in practice each and every day.

The first set was back and forth and we did not pull away until right at the end. We had to fight for every point. The second set we went up big with Madeline Burgess putting up some big service points to take an early 10-point lead. She ended up with 6 aces and 6 digs for the night.

During a time out by Park View, I cautioned the girls to get too comfortable with the lead urging them to stay in the driver’s seat and not to let off the gas that this team was not going to give up and the momentum could change. They did make a comeback but it wasn’t enough. The final set was back and forth with the Indians staying a few points ahead the entire game.

Junior defensive specialist Madeline Burgess commented about the game, “We as a team  worked together and pushed everyone to do their best which led to our success against Park View.”

This win was a team effort from the hustle and heart shown on the court to the cheers and encouragement being shouted from the bench. Senior Emma Drake had an outstanding game putting up 24 kills out of her 33 attempts. Both setters played extremely well Jamey Bunn put up 22 assists and Ashlyn Edwards had 13 assists. Jacey Bunn showed lots of toughness on defense putting up an impressive 13 digs.

Drake, senior middle hitter, commented about the win last night said, “Going into the game last night, we didn’t know what to expect. After losing to them last year during district play we knew what defeat felt like.

So at the end of our season last year we pushed ourselves and beat the Lady Dragons in conference play. Playing Park View gives us such a competitive drive that when we are in the zone nothing can stop us. Last night the crowd and energy in the gym pushed us to achieve greatness. We are inching our way closer and closer to district champs.”

Varsity is 5-0 and we will be hoping to improve our record on Thursday with a home match against Sussex at 5:30. Both JV and Varsity will be traveling to the Endless Summer Tournament this Saturday.