Hurricane Irma rages on to Florida 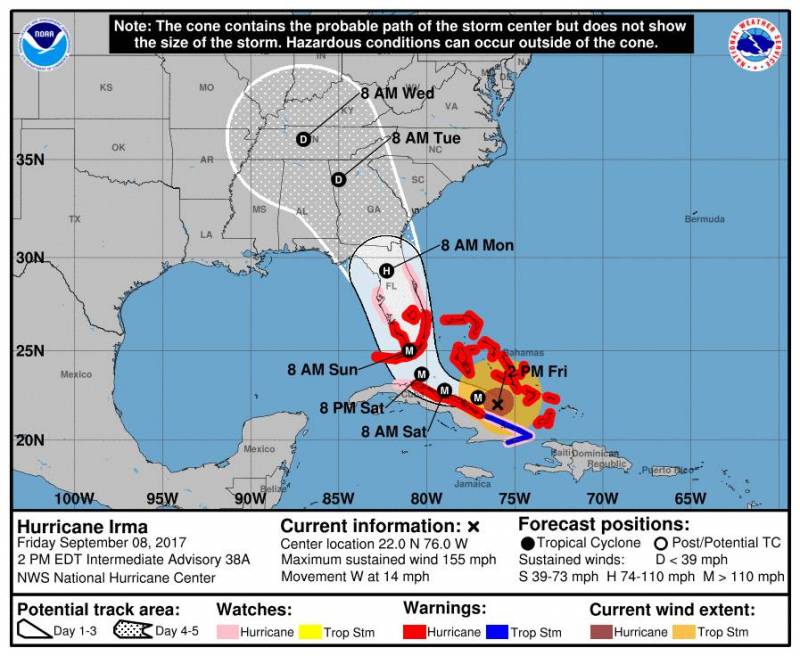 WAKEFIELD
Hurricane Irma has certainly had everybody’s attention on the Eastern Seaboard since it gained strength as a Category 5 storm a few days ago. Late Wednesday and early Thursday, it hit the Caribbean islands of Barbuda and Antigua, causing massive destruction to its infrastructure, homes and business. Other islands affected include Puerto Rico, St. Martin and the British and U.S. Virgin Islands.

On Friday, the National Hurricane Center reported the following on its website:

“At 5 p.m., the eye of Hurricane Irma was located near latitude 22.1 North, longitude 76.5 West. Irma is moving toward the west near 12 mph (19 km/h), and a turn toward the northwest is expected by late Saturday.  On the forecast track, the eye of Irma should continue to move near the north coast of Cuba and the central Bahamas tonight and Saturday, and be near the Florida Keys and the southern Florida Peninsula Sunday morning.

“Maximum sustained winds are near 155 mph (250 km/h) with higher gusts. Irma is a category 4 hurricane on the Saffir-Simpson Hurricane Wind Scale. Some fluctuations in intensity are likely to continue during the next day or two, and Irma is expected to remain a powerful category 4 hurricane as it approaches Florida.

Jeff Orrock, a meteorologist at the National Weather Service in Wakefield said, “Irma’s going to turn, but it’ll be slower than what’s forecast earlier. That’s the trend. We’ll have to keep watch. Saturday will be a telling time.”

For this region, residents are advised to keep a watch on storm reports.

“In general, the biggest thing is for people to stay aware, hope for the best and prepare for the worst,” said James Foster, fellow meteorologist at the NWS, Wakefield. “Make sure you have a good supply of canned foods and plenty of water,” he said, and that also goes for any medications you need.

“If you have pets, have food for them and anything they might need,” he continued.

For gasoline needs, fill up early is his advice and, if feasible and safe, store some as well.

“Listen to local officials if you’re near water,” said Foster. “Be prepared for any evacuation orders.”

As if Irma weren’t enough, there’s also Hurricane Jose, which is still east of the Caribbean, and tentatively forecast to move toward Bermuda by Tuesday afternoon.

The NHC stated on Friday: “At 5 p.m., the eye of Hurricane Jose was located near latitude 16.6 North, longitude 58.3 West. Jose is moving toward the west-northwest near 17 mph (28 km/h). A turn toward the northwest with a decrease in forward speed is forecast tonight through the weekend.

On the forecast track, the core of Jose will pass close or just east of the northern Leeward Islands.

“Maximum sustained winds are near 150 mph (240 km/h) with higher gusts. Jose is a category 4 hurricane on the Saffir-Simpson Hurricane Wind Scale. Some fluctuation in intensity, up or down, could occur during the next day or so. Gradual weakening is expected after that.