FRANKLIN
The United Network for Organ Sharing announced on Friday morning that Gene Pierce, UNOS’ founder and original executive director, passed away at the age of 88. 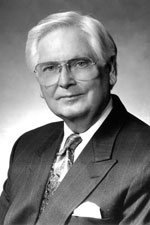 “Gene Pierce’s vision and dedication created UNOS as a truly unique entity,” said UNOS CEO Brian Shepard. “He helped bring the transplant community together at a critical moment in time to establish the national transplant network that exists today.”
Pierce, a graduate of Franklin High School and Randolph-Macon College, began his transplant career in 1964 as a surgical administrator at the Medical College of Virginia (now VCU Health). Inspired by Dr. David Hume, the hospital’s pioneering transplant surgeon, Pierce became involved in efforts to preserve donated organs longer, transport them over greater distances and ultimately share them among transplant hospitals if they could not be transplanted locally.
In 1975, Pierce became executive director of the newly formed South-Eastern Organ Procurement Foundation (SEOPF), based in Richmond. Originally an organization of 18 transplant centers in nine states, SEOPF soon began to expand its services to other transplant hospitals and organ procurement organizations elsewhere in the country. To facilitate the process of placing organs over distant locations, SEOPF pioneered the use of a computer-based matching system called the United Network for Organ Sharing.
In 1982, Pierce coordinated funding and logistical support to establish a 24/7 call center to help place donated organs. Originally called the SEOPF Kidney Center, it continues as the UNOS Organ Center. The Organ Center recently celebrated its 35th year of uninterrupted service.
As the transplant community grew and as patient treatment and survival improved, the U.S. Congress passed the National Organ Transplant Act in 1984 to unite the efforts of all organ procurement organizations and transplant hospitals nationwide. UNOS was founded as a non-profit organization that same year, and Pierce became its executive director. UNOS began serving in 1986 as the national Organ Procurement and Transplantation Network (OPTN) under federal contract and has continued in that capacity ever since.
Pierce was an integral figure in establishing the structure of the OPTN, as well as developing national policies for organ allocation and standards for member institutions. Upon his retirement from UNOS in 1995, the national network had grown to include 60 organ procurement organizations and more than 220 transplant hospitals, performing more than 19,000 transplants per year.
While Pierce had no clinical background, he worked tirelessly to work with donation and transplant professionals and bring them to consensus.
“They put aside their individualities to a great extent for the common good — transplanting the best organs in patients to give them the best possible outcome,” he recalled in an interview. “We committed ourselves to doing everything in our power to make their jobs easier and help the patients who could benefit from transplantation.”
His influence extends beyond just the United States. Pierce was a friend and confidant of transplant professionals around the globe. Through hosting overseas visitors and traveling to other countries to share UNOS’ experiences, he was a catalyst for the development of other national transplant networks, particularly those of Japan and South Korea.
“Our father loved United Network for Organ Sharing, and his passion for the organization and for organ transplantation never wavered throughout his entire life,” said his daughter Melanie Pierce McClaskie. “He was humbled by the work he did, and he poured his joy, passion and energy into its creation.”
NOTE: a video interview with Gene Pierce is available on the website of the American Society of Transplant Surgeons (http://asts.org/about-asts/chimera-chronicles/profiles/gene-a-pierce#.WacaS7KGOCh)

Arrest made in attempted robbery