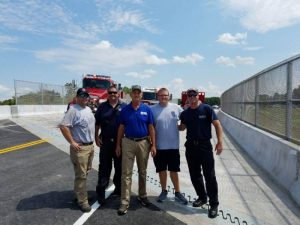 Submitted Joel Bradshaw
Joel Bradshaw, center, with firefighters John Williford, left, Chris Smith, Joel Bradshaw, Tyler Butler and Jim Breckenridge. Though never a firefighter himself, Bradshaw said that his father, Joel C. Bradshaw Jr., was one of the founders of the Carrsville Volunteer Fire Department. “My mother’s father, Sherman Butler, was one of the local residents who helped build the original bridge by hauling fill dirt,” he continued. “Dewitt Wright set the pilings for the original bridge.”

STAFF REPORT
CARRSVILLE
After a year and five months construction, the bridge in Carrsville reopened on Thursday, almost three months ahead of its scheduled opening on Nov. 22.
According to information from the Virginia Department of Transportation, crews had reopened the structure to traffic in both directions over the CSX railroad tracks in Carrsville.
Built in 1936, the original bridge carried traffic over the CSX railroad and Route 632 (Old Myrtle Road). Over time, the need for additional vertical and horizontal clearance under the bridge became apparent. The new bridge, built by Bryant Contracting Inc. at a cost of $6.7 million, features two 12-foot travel lanes with 8-foot shoulders as well as additional clearance under and around the structure. Construction began in March 2016. Roadside ditch and storm water runoff improvements were included as part of this project.
In May of this year, the Commonwealth Transportation Board had unanimously approved a resolution to rename it the Carrsville Community Memorial Bridge.
Joel Bradshaw, who has a store at the foot of one side, said that Sherman Butler, his maternal grandfather, was one of the local residents who helped build the original bridge by hauling fill dirt. Dewitt Wright set the pilings.

Arrest made in attempted robbery