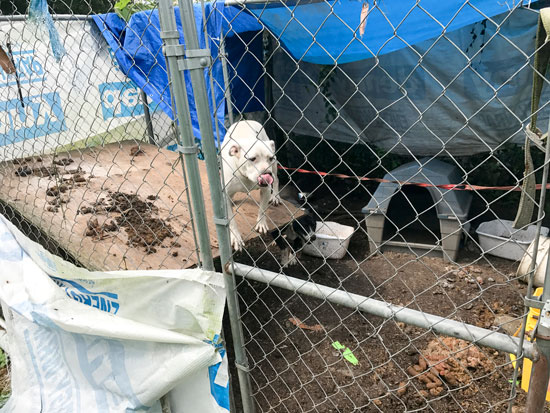 This is one of several images that PETA representatives took to document what it believes is neglect on the part of this dog’s owner, Tonya Y. Brown of Boykins. She has been charged with two counts of animal cruelty, and is scheduled to have an arraignment on Tuesday, Sept. 5, in General District Court.

A Boykins woman has been charged with two counts of cruelty to animals following a complaint made by PETA — People for the Ethical Treatment of Animals — to the town police office.

Tonya Y. Brown of Boykins was charged on Aug. 24 and, according to the state courts website, was released on a summons. An arraignment is set for Tuesday, Sept. 5 at 1 p.m. in General District Court, Southampton County.

According to its press release on Thursday, the charges come from what PETA has documented as “persistent neglect of two female pit bulls, Princess and Gigi, who were perpetually kept caged in a small chain-link pen in her mother’s backyard, where there was so much feces on the urine-soaked ground that the dogs defecated on top of their own doghouse.”

“These dogs were kept isolated outside 24/7, in all weather extremes, deprived of exercise, companionship, and affection and unable to escape their own waste as it accumulated around them,” stated PETA Senior Vice President Daphna Nachminovitch. “Dogs are highly social pack animals who invariably suffer when left out of sight and out of mind in the backyard, and PETA hopes the court will order Ms. Brown to relinquish these long-neglected dogs and permanently ban her from having any others.”

Nachminovitch told the newspaper that her agency had become aware of the situation through a phone call by some concerned citizens. PETA had actually encountered Brown as far back as December 2013.

“We consistently have tried to educate and get these conditions to improve, leading by example,” she said, adding that PETA field agents have repeatedly talked to Brown, her mother and son about the dogs’ living conditions.

At one time, the agents came and found the pen padlocked, and therefore couldn’t get in to clean.

Offers have been repeatedly made to take the animals off out of Brown’s care.

“They’re perfectly nice dogs,” said Nachminovitch. She recalled one visit when they were out of the pen and “the dogs jumped right into our van. They want out. They’re just being kept as status symbols in a filthy pen.”

She acknowledged she had called the police last week, and said she’s aware the Sgt. Brazzo has also received complaints from other people about the situation.

“This an unlawful, inhumane and totally unacceptable,” Nachminovitch said.

PETA urges anyone who witnesses neglect to report it to local authorities. If possible, witnesses should take pictures and keep track of how long an animal is without adequate food, water, or shelter. For more information, visit PETA.org.