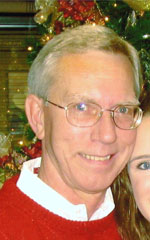 Bob was born in Columbia, Tennessee, on Dec. 4, 1950, to the late Ruth Warren Tucker Petty and Robert Lycurgus Petty III.
He was a graduate of the College of William and Mary, and spent the better part of his career at Bronco Federal Credit Union, which he truly enjoyed every day.
He was known for his unending dedication to the community. He was a long standing member of the Children’s Center Board of Directors, most recently serving as president; and a member of Emmanuel Episcopal Church, where he served as a longtime Lay Reader as his father had before him.
He was a Book Buddy for Franklin City Public Schools and a member of the Board of the Franklin City Educational Foundation, as well as a member of the United Way Board.
“Bob-o” as he was known to most, was a devoted father who shared wisdom, dedication and a dry sense of humor with those he was close.
Left to cherish his memory are a daughter, Sarah Tucker Petty of Washington, D.C.; two stepdaughters, Dr. Toni Katherine Gross (John Conley) of Phoenix, Arizona and Andrea Gross Earnhardt (Jonathan) of Charlottesville, Virginia; ex–wife and friend, Shawn Lee Bell of Charlottesville; a grandson, Nathaniel Lucas Earnhardt; granddaughter Lael Emma Earnhardt; aunts, Martha Jane Hines of Columbia and Peggy T. Pierce of Memphis, Tennessee; and three cousins and their families.
The memorial service will be at noon on Wednesday, Aug. 30, in Emmanuel Episcopal Church, with the Rev. Ben R. Duffey officiating.
Following the service, family will greet friends in the fellowship hall.
In lieu of flowers, memorial donations can be made to the Franklin City Educational Foundation to be directed to the Ruth T. Petty Scholarship or to the Children’s Center.
www.wrightfuneralhome.org.