Is this really Guam? 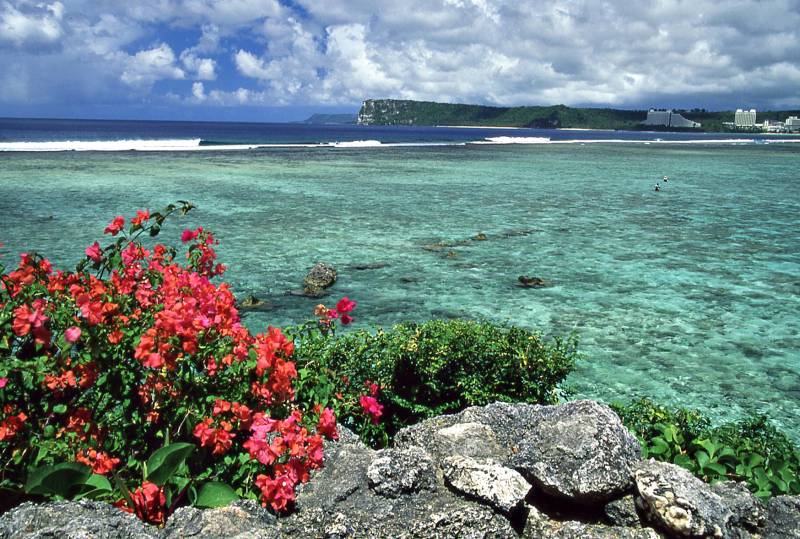 My friend, Bill, waits while I retrieve my bag from the carousel. He’s been here for a month and he’s my liaison for official and unofficial matters. My flight was on time and the sun is still high here, in spite of the eight hour-plus, 4,000-mile trip from Honolulu. He’s glad to see me; I’m his relief. He’ll catch the flight back to Honolulu tomorrow.

When the automatic outside doors open, the air hits me like a heavy wet blanket. I know immediately that I’m in a tropical climate. I seem to automatically slow down as if I’m trying to swim upstream in an endless current.

My friend, and coworker, leads me across the street, into a not full parking lot. We stop at the rear of a not new, but not old rental car. We will transfer the car to me for my use during my stay. I notice that the car has no hubcaps or wheel covers. I sense a story here.

This is Guam, where the sun first rises in America. The island, along with a handful of others, became a United States territory as a result of the Spanish/American war. Spain claimed the island about 40 years after its initial discovery by Ferdinand Magellan on his now famous round the world voyage.

Magellan’s journey was well documented, but imprecise as to the Guam landing site. Later occupation placed his landing at Umatac, on the south shore, and that’s where the history books place it. Today, there are remains of a fort, roads and bridges, left from the Spanish colonial period. The Guam culture considered most found objects to be community property and Magellan labeled it the “Island of Thieves.”

Bill drops me off at my hotel to check in and take a short rest. He’ll meet me in a couple of hours to do a short drive around to some points of interest for my stay.

Pilots are required to undergo a series of training events every year. One half is about the aircraft and actual flight tests. The other concerns safety, operational procedures and flight standards. Continental has hired a group of recently retired pilots to be instructors for the procedures part. Bill and I are part of that group.

Classes are held in Newark, Cleveland, Houston, Honolulu and Guam. For Guam, instructors volunteer for a full month at a time. In three months, all pilots are expected to have completed the training.

I wanted to venture to a place that I’ve only been to once before. I wanted to have enough time to explore and photograph the island, and maybe a couple of others.

Bill calls and I meet him in the lobby, a little bleary-eyed from jet lag, but ready to see things. He shows me a couple of restaurants that fit my budget, and gives me a rundown on the job. He wants to go for a hike to a somewhat remote area where World War II Japanese tanks and other vehicles have been positioned for post-war target practice and modern day off road dirt recreation. It’s still a hot day.

It’s about 10 miles to the backcountry entry, hidden somewhat behind a row of trees. It’s dirt trails from this point forward. We find the hulks, wonder at their former use on Guam, and pick each other’s brains about the engines. This place was not a battlefield; relics were transported here initially for target practice. Today it’s a hiking and dirt bike area.

It’s fun to climb on and in a couple of the relics. Others have been here and left their painted initials, dates, and messages on the rusting metal. There are no maps for this place. The trails change with the weather and use. Last month’s delight may be washed away by this month’s rain. All terrain vehicles, dirt bikers, bicyclists, and hikers all leave their mark in the red dirt. We leave our footprints and sweat.

We take a different route back to the hotel, through the naval area, that is not fenced in, around Nimitz Hill. Many names of places on this island are taken directly from leaders during the Pacific campaign of World War II. I make a mental note of possible hiking trails.

Our last stop is at an abandoned hospital building on top of a hill overlooking Tumon Bay. It’s a beautiful view. My hotel is directly below, and the azure waters stretch for a mile and a half along a crowded hotel shoreline, terminating at distant Two Lovers Point. I know I will revisit this place many times during my stay.

JAMES D. “ARCHIE” HOWELL is a Southampton County native and 1955 graduate of Franklin High School. He can be reached at archiepix@kingwoodcable.com. 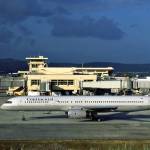 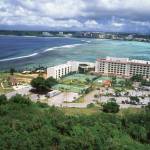 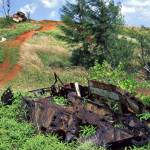 Relics and red dirt in a dirt bikers paradise 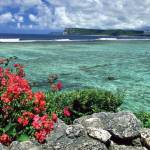 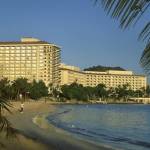 The Guam Hilton, my home for the month. 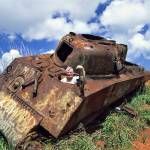 Archie tries out the driver’s seat in this long-dead tank.