Board encouraged by SOL report 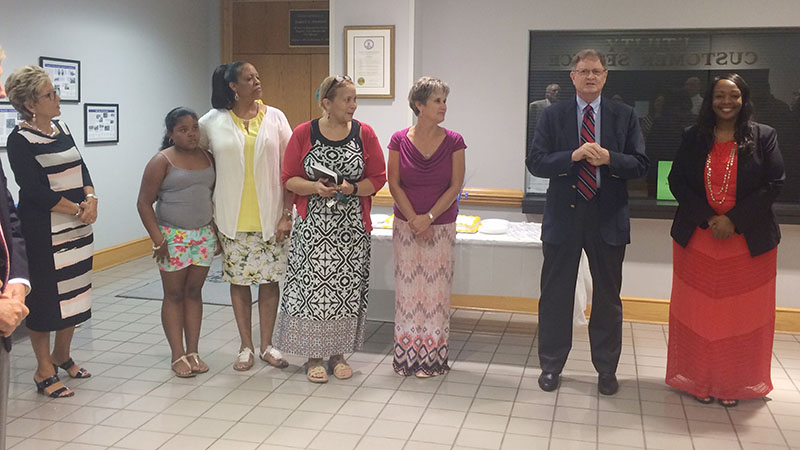 At far right, Franklin City Public School Superintendent Tamara Sterling is welcomed during a reception for her, which took place on Thursday afternoon in the City Hall vestibule. Next to her, school board chairman Bob Holt told about the interviewing process and how the decision to hire her was unanimous. -- Stephen H. Cowles | Tidewater News

FRANKLIN
Even before the Franklin City School Board met for its closed session on Thursday, the members were first out in the vestibule of City Hall to welcome the new superintendent Tamara Sterling with a reception that afternoon.

Board chairman Bob Holt explained to all present of how the Virginia School Board Association assisted Franklin with the search. First there 40 candidates, which was cut down to 11, then winnowed to seven, and finally three, which were each interviewed twice. The board was unanimous in their choice. Sterling had “come out on top.”

He noted how she had done her research about Franklin and had come prepared with a 50-page activity plan.

Sterling said in response, “I feel I hit the ground running. We’re all connected in having one goal, one vision, and that is to make Franklin City Public Schools the best they can possibly be.

“I already feel so much love.”

An hour later, the board was at work in the public meeting.

The board expressed its pleasure at the preliminary results of the Standards of Learning tests this past school year. The Virginia Department of Education had released this early report on Tuesday. Both J.P. King Jr. Middle School and Franklin High School met accreditation benchmarks in all four categories, with S.P. Morton Elementary School having success in history and math, but missing the mark in English and science. Nevertheless, the members were encouraged by the progress all three schools have made in the past year or so.

“We’re moving, definitely in the right direction,” said Sterling, to which Holt added, “There’s no doubt in my mind that next time this year they’ll be accredited.”

Gail Wade of Human Resources then gave an update on personnel. At FHS, the number of teachers/professional staff in 2016-2017 was 39, with 10 resignations/retirements, and nine new hires. There’s still a vacancy still available for one alternative education teacher.

Reasons for leaving, based on the 17 responses to a written survey, include student discipline (19 percent) and salary (18 percent) and school culture (12 percent).

Joan McCullough was named the assistant principal at SPM, and Pamela Kindred is the coordinator of financial services in the school system.

Summer maintenance projects are continuing with many anticipated to be completed before or soon after school begins Sept. 5.