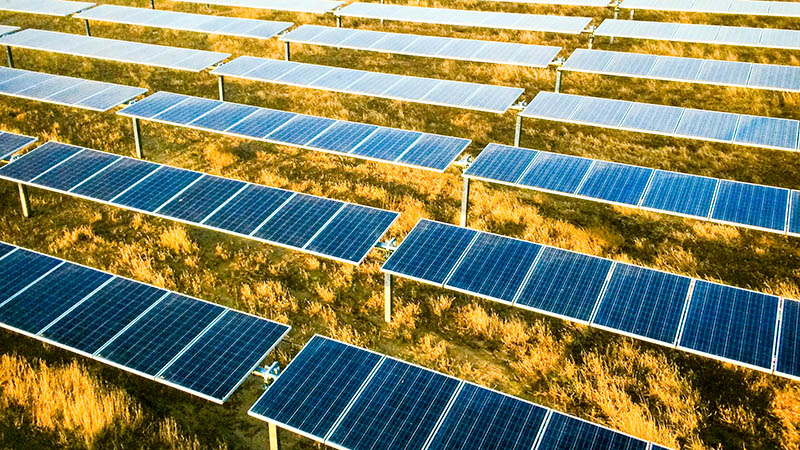 This photo shows an example of how solar panels would be set up if allowed to be established in certain areas of Southampton County. On Sept. 26, the board of supervisors approved 4-2 to allow one company to create a solar farm. -- FILE Photo

COURTLAND
For Southampton County, 2016 was a year of infrastructure projects and municipal elections.

1. Roadway projects receive green lights. In January, the Virginia Department of Transportation green-lighted several roadway projects, including the now-under-construction U.S. Route 58 interchange at Route 742 in Courtland, also known as the Courtland Interchange; and the General Thomas Highway Signalization Project, which will provide signalization of the east and westbound off-ramps from U.S. Route 58 onto state route 671.

The project is expected to be complete by December 2018.

2. Also in January, the Southampton County Board of Supervisors approved a conditional land use permit for Verizon Wireless to build a 199-foot monopole cell tower near Sebrell at the intersection of Johnson’s Mill Road and Vicksville Road.

The site will allow room for future co-location of at least five additional wireless carriers.

Marian Lewis, 49, of Courtland pleaded guilty in November 2015 to five counts of mail fraud. The plea came during a jury trial at which her husband, a deputy with the Southampton County Sheriff’s Office, was acquitted on all related charges.

Court documents showed that Lewis worked as the retirement community’s bookkeeper for two decades and that she was stealing money from at least Nov. 27, 2009 through Feb. 26, 2014.

According to representatives from the firm, the existing courthouse was built in the 1800s with additions build in the 1960s. The board has discussed security upgrades to the building for more than three years and various court personnel have voiced concerns that it is not up to today’s standards.

5. Newsoms mayor resigns as condition of lawsuit dismissal. A Southampton County judge agreed to dismiss one of the pending suits against the Town of Newsoms and Acting Mayor/Vice Mayor Harvey Porter on the condition that he resign, which he did in April.

Porter had assumed the duties of acting mayor on Aug. 20, 2015, following then-Mayor Kenneth Cooke’s resignation. The lawsuit, brought by six Newsoms residents, requested the reinstatement of the town’s police department, a permanent injunction prohibiting the town council from acting on any matters in a closed meeting, and the appointment of a special commissioner to observe council meetings and audit town accounts.

6. Nobody running for mayor, town council in Newsoms. In late April, one week before the Town of Newsoms’ mayoral and town council elections, nobody had filed paperwork to run for any of the available positions.

By May, the votes from the mayoral elections in four Southampton towns had been tallied and resulted in the incumbent mayors for Boykins, Capron, Courtland and Ivor remaining in place. As of May 4, the results of Newsoms’ election had yet to be finalized.

By May 8, Vanless Worrell was declared the winner of Newsom’s mayoral election with 15 votes.

7. Solar farm proposed near Boykins. With the expectation that it will produce enough electricity to supply roughly 20,000 households across Western Tidewater, Community Energy Solar LLC filed an application with Franklin Southampton Community Development in June to develop a 1,200-acre solar farm between Boykins and Newsoms.

The project, called Southampton Solar, went to the Southampton County Board of Supervisors for approval in late September, which it received in a 4-2 vote.

8. Hearing set for Newsoms lawsuit. In late June, the Suffolk Circuit Court set a date and time of Tuesday, Nov. 22, at 2 p.m., to continue the proceedings for a lawsuit filed against the Town of Newsoms by former Newsoms Police Chief Jeffrey McKenney, which seeks $1.329 million in damages for defamation, three counts of tortious interference with a contractual relationship, and lost wages. McKenney alleged in the suit that his reputation and status as a law enforcement officer and member of the community in which he served were slandered by acts of the Town, specifically those of former mayor Kenneth Cooke and former vice mayor Harvey Porter.

On Aug. 18, 2015, McKenney’s employment with the Town of Newsoms was effectiv ely terminated in a letter written by then-mayor Cooke, who insinuated that the police chief had falsified his time sheets and also referenced concerns raised by the southampton County Commonwealth’s Attorney regarding a 2012 grand jury indictment in which McKenney was charged with one felony count of obtaining money while he was employed by the Dinwiddie County Sheriff’s office. The charge was eventually dismissed but resulted in the commonwealth’s attorney, Eric Cooke, saying that he would no longer consider McKenney a credible witness.

In early July, Newsoms’ new mayor, Vanless Worrell, was officially sworn into office, and in mid-July, Newsoms Town Clerk Ruth Dunn quit abruptly during a town council meeting, at which she was questioned over raises she reportedly received in 2011 and 2013.

The day after the meeting, Dunn explained her reasons for leaving as, “I had taken all the lies and slander and insinuations that I could take and just decided that it was best to walk away.”

Mayor Vanless Worrell asked her for an official letter of resignation by Wednesday and said he appreciated her stepping aside.

9. Appointees named to no-wake zone task force. In August, the Southampton County Board of Supervisors appointed five men to a task force intended to provide input on the best way to deal with the issue of no-wake zones on the Nottoway River. Wayne Bonds, Doug Williams, Keith Davis, Jerry Bradshaw and Hunter Darden were appointed to the task force. There are four separate no-wake zones on the river starting with the public boat landing near the General Vaughan Bridge through the former Dockside Restaurant in the Nottoway Shores Subdivision.

10. Interference claims against Newsoms dismissed. A judge accepted a demurrer filed on behalf of the Town of Newsoms and dismissed all tortious interference claims brought by Randall-Page P.C. On behalf of former Newsoms Police Chief Jeffrey McKenney at the Godwin Courthouse in downtown Suffolk in late November.

The claims were dismissed with prejudice, meaning they cannot be brought back up in the next court session, and the plaintiff was given until Dec. 13 to file an amended complaint concerning the wrongful termination termination and defamation claims.