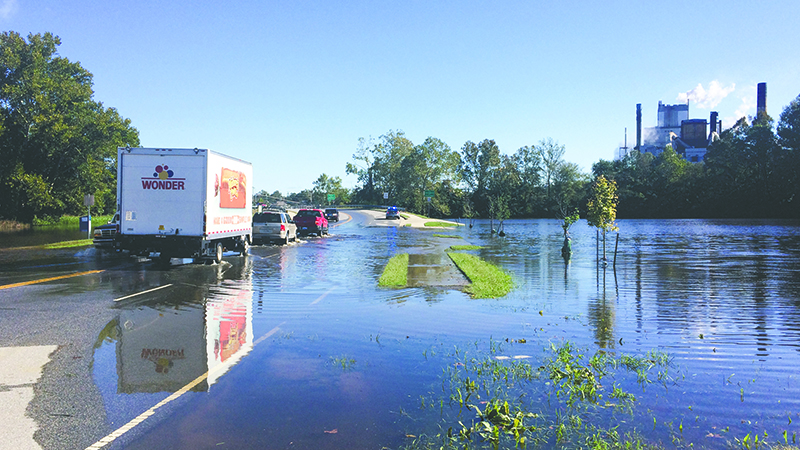 After Hurricane Matthew had blown away, the Blackwater River crested on the roadway at the Second Avenue Bridge in Franklin.

FRANKLIN
The year 2016 was certainly an eventful one for the city of Franklin, and especially so for Franklin’s municipal government and Franklin City Public Schools, which made headlines both locally and regionally throughout the year.

In January, the Virginia Board of Education granted partial accreditation to S.P. Morton Elementary School and J.P. King Jr. Middle School, putting the schools on track to receive full accreditation within three years.

In February, The U.S. District Court Eastern District of Virginia dismissed a lawsuit against the City of Franklin filed by Franklin resident Kenneth Sanford, who, at the time, was running for mayor of the city. The lawsuit centered on the city’s confiscation of Sanford’s Chevy Tahoe for unpaid taxes.

Five specific issues the firm identified were a lack of segregation of duties, oversight over financial transactions, significant deficiency in internal controls, budget activities and procurement of services. The school board refuted the auditors’ claims and said no corrective action was necessary in March.

The ruling came after The Tidewater News investigated the issue and ultimately brought it to the attention of Del. Rick Morris, who asked Herring to issue an opinion.

Current incumbents in Ward 1 and Ward 2, Barry Cheatham and Benny Burgess, were also elected to serve another term on council in non-contested elections.

Franklin Mayor Frank Rabil said failure to resolve the budget deficit could negatively impact the City of Franklin’s bond and credit rating, since city council is tasked with funding the school board.

“It is disappointing because in June of this year right before the end of [the school board’s] fiscal year, which ends on June 30, it was reported that they only spent 92 percent of their budget, and they potentially had a carryover of around $300,000 unspent,” Rabil said. “Come September, they find that they’re $480,000 over; not under, over. You’re talking about a mistake of nearly three quarters of a million dollars.”

According to school board member Bob Holt, the superintendent’s office’s official explanation at the time for the deficit was that a new finance employee made a clerical error, but Holt was surprised no one caught the mistake earlier.

Both the fishing pier and steps at Barrett’s Landing were underwater, as was a large portion of Broad Street near South Street.

The Route 58 interchange at Armory Drive closed due to flooding on 58E. Road blocks were set up and traffic was being rerouted.

The resolution, drafted by City Attorney H. Taylor Williams IV, lists 10 reasons for the council’s decision to demand the board members’ resignations and stipulates that if any members of the board do not submit letters of resignation by Nov. 7, Williams is to file a petition with the Southampton County Circuit Court pursuant to Virginia Code sections 24.2-233 through 24.2-235 asking the court to issue a rule for the board members to show cause why they should not be removed.

Bell will receive a severance package of his full salary plus benefits for 120 days.

The board also voted unanimously to name Kelvin Edwards Sr., the division’s director of teaching, learning and accountability, as interim superintendent.

By 9:05 p.m. Nov. 7, all members of the board had tendered their resignations to city council, meeting the deadline established by council in a resolution adopted Nov. 1.

Editor’s note: This article was updated on Jan. 3 to correct an error about the election for mayor.  In the Jan. 1 edition, the article reviewing news in Franklin during 2016 stated “Frank Rabil won Franklin’s mayoral election in a landslide in May, defeating incumbent Mayor Raystine Johnson-Ashburn.” Although she did receive a number of write-in votes, she was not an official candidate on the ballot.