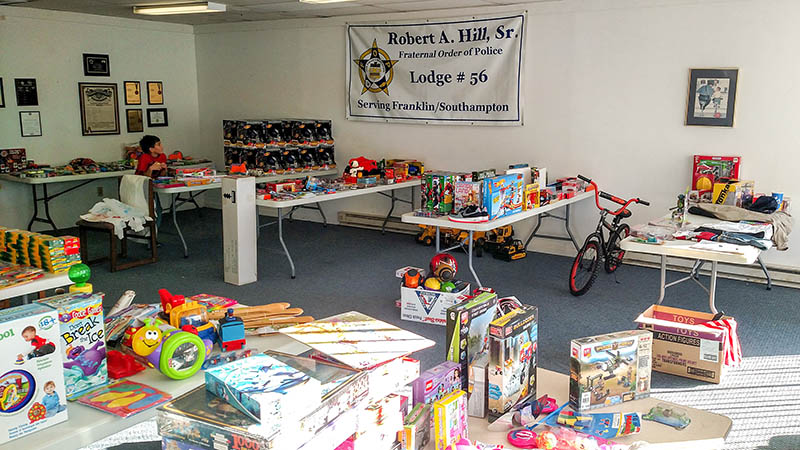 The donated toys on display at the lodge. -- Submitted | Sammy Carr

COURTLAND
Members of the State Trooper Robert A. Hill Fraternal Order of Police Lodge in Courtland gave out over 1,000 Christmas presents to 323 local children Dec. 22 through 24.

The giveaway, held at the Courtland lodge, marks the conclusion to the FOP members’ months-long effort to collect toys for underprivileged children living in the Tidewater area, which began in late October with the 10th annual Robert A. Hill Toy Ride.

Hill’s former partner, retired State Police Sgt. Sammy Carr, organizes the 60 to 70-mile motorcycle ride each year to honor Hill’s love of providing toys to children at Christmas time. Riders could participate for $15 and passengers for $5.

According to Carr, this year’s ride included approximately 85 riders, some of whom came from as far away as Richmond, Norfolk and Virginia Beach, and raised a total of $970 to purchase toys.

Toys also came in via donations from various local businesses and organizations, including Franklin Cooperative Ministries on High St., the Dollar General in Courtland, Southampton County Social Services and The Tidewater News.

In addition to toys, the lodge also gave away 50 Bibles and an assortment of clothes. A collection of apples and oranges provided by the Southampton High School 4-H Club was also given to each person who came in to receive Christmas gifts.

The lodge and toy drive are named for Senior Virginia State Trooper Robert A. Hill Sr., a native of Courtland, who was struck and killed while conducting a traffic stop on Route 58 by the driver of another vehicle.

According to Carr, Hill would solicit fellow officers each year around Christmas time for toys to donate to Courtland children. When Hill was killed, Carr took up his partner’s tradition and made it one of the missions of the FOP lodge. Carr hopes for even more donations for next year’s efforts.