Riverkeeper report: The Lord will provide

Spirit of Moonpie and I spent the 7th through the 9th on the Blackwater above Joyner’s Bridge. The water was 47 degrees and 4.70 on the USGS gauge at Burdette. Air temps ranged from 24 to 50 degrees. It was cold.

I did not see any water quality issues; in fact the river was in very good shape up there. It was almost back up to normal levels for this time of year, very little trash and no derelict limb lines. The only thing I saw that pissed me off was more deer carcasses dumped at the boat landing. Why do people think that’s OK? 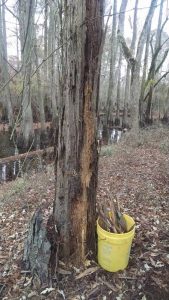 The Riverkeeper searched — and found — lighter wood that would burn much quicker than the oak he had ordered for his campfires. — Submitted | Jeff Turner

Anyway, the fishing on this trip was not too bad. I caught six small largemouth on the Mepps minnow and one speckle. I mainly was there to see if the blackfish (Bowfin) were hitting yet, but I never had a hit. I talked to some fellows that were mopping up on the speckle, they were having a ball even though they were ‘bout to freeze. One also caught a very large jack. Great job, P. Helms!

I did not see much wildlife on this trip. Heard some beavers both nights that were pissed off I was there. They were swimming back and forth in front of the campsite slapping their tails. Moonpie said, “Dude, don’t they get it that the tail-slapping thing just doesn’t work? That doesn’t scare anybody.”

“RIGHT,” I replied, “So why are you in the tent under the sleeping bag and other gear?”

I did not hear a reply from the tent.

I also saw a Great Blue Heron, squirrels and some wood ducks. I also heard the river spirits calling the second night, I think they were calling to tell me I was nuts for being out there that cold.

Wow! I was so excited to get out on this trip cause I took delivery of a load of expensive as hell oak that I ordered. I specified it to be all oak, nice and straight so I could split into kindling with hatchets and that it be dry. Man, that stuff split so easy, I was so happy … until I tried to have a fire that first night. That wood was like fire retardant it was so wet. I ‘bout froze that night; luckily, I had brought the last of my old wood also. So the next day, I was in a fix. I had to burn just about all of my old dry wood the night before.

Telling Freezing Deer ‘bout it on the phone, she recommended I find some rich wood, which is what they call lighter wood in Tennessee. So that’s what I did and ended up finding the mother lode of all lighter wood stumps. This was actually a lighter wood tree, about 8 feet tall! So I filled up a bucket and took it back to camp.

Unfortunately, as dripping sap wet as that lighter wood was, it would not burn that oak. So I had to go around the camp and break dead limbs etc., to add to the little bit of dry wood I had.

That was a real issue for me to do at night in the dark, really dangerous for me, to say the least. The lighter wood still saved our tails though, as it kept that damp round wood I gathered up burning. I tell you that stuff was like gasoline. So because of that lighter wood find it was not so bad on that bone-cold 24-degree night.

So once again we were fortunate that the Lord provided for us on the two rivers we call the Blackwater and Nottoway.