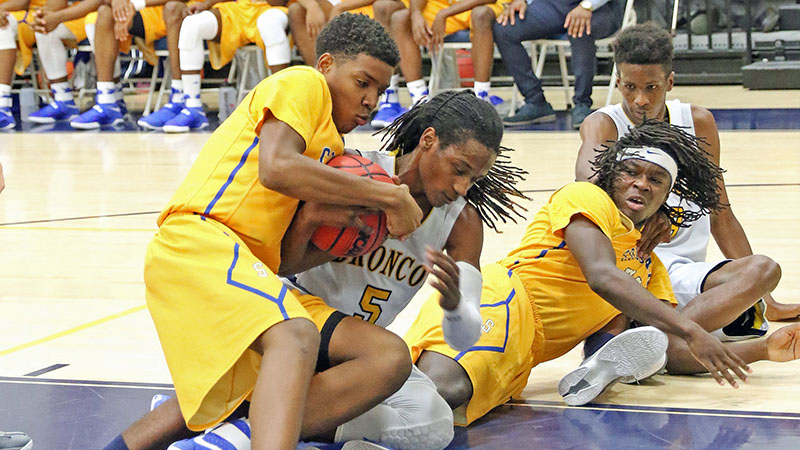 Markeen Tyler fights to the floor for a rebound. -- Frank A. Davis | Tidewater News

FRANKLIN
In a hard fought basketball game that came down to a battle in the last quarter, the last shot determined who would be the winner in a matchup between the Franklin High School Broncos and the Surry County Cougars.  Playing at the Peggy Wilkins Gym at Franklin High School on Monday, Dec. 12, the Broncos had the ball with 8.4 seconds remaining in the game with the score 38-37 in favor of the Cougars. The shot to win the game at the buzzer failed and the Cougars were the winners.

Broncos, head coach Robbie Cutchins remarked after the game, “I was so proud of the guys. They fought their hearts out to be down three times by 8 and twice by 9 points. Bottom line a couple shots go our way and we could have won the ball game.”

The Cougars were up 5–0 in the first quarter before the Broncos got on the scoreboard. The home team tied the score at 7 but the Cougars moved back out in front and held the lead at 13–9 at the end of the quarter.

The score remained tight in the second quarter as the Broncos closed to within a point at 20-19 with 2:26 remaining in the half, but the Cougars extended their lead by a score of 25-19 at the end of the second quarter.

Offensively in the second half the Broncos led in scoring for both the third and fourth quarters, but missed some key shots and turnovers hurt the home team as they struggled to catch the Cougars.

Both teams each had only one player score in double figures. For Franklin it was Markeen Tyler who led the Broncos with 11 points, and for the Cougars it was B. Jones who led all scorers with 14 points. 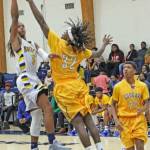 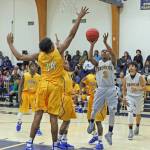 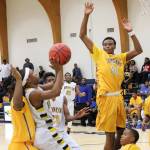