POWHATAN
The Southampton Academy boys’ basketball team improved to 1-1 on the young season as the Raiders demolished Blessed Sacrament Huguenot on the road Friday night by a final score of 59-29.  The loss dropped BSH’s record to 0-4.

The visiting Raiders ran away from the Knights from the opening tip, outscoring the home team 19-2 in the first quarter. Coach Chris Pope’s squad kept their feet on the accelerator in the second quarter, outpacing their opponents by 14 to take a 35-4 halftime lead.

The teams scored more evenly in the second half, with SA winning the third quarter 19-14 and BSH actually dominating the fourth by a score of 11-5, but the 31-point halftime lead the Raiders had established was just too much, and they easily held on to win by a final score of 59-29.

Only one player for BSH cracked double figures, as Noah Dowdy scored 12 points for the Knights.

The Raiders’ next game will be this Friday, as the team travels to Suffolk to begin tournament play in the Nansemond-Suffolk Academy Holiday Classic. 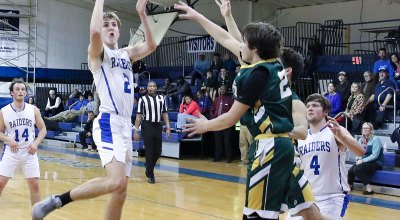