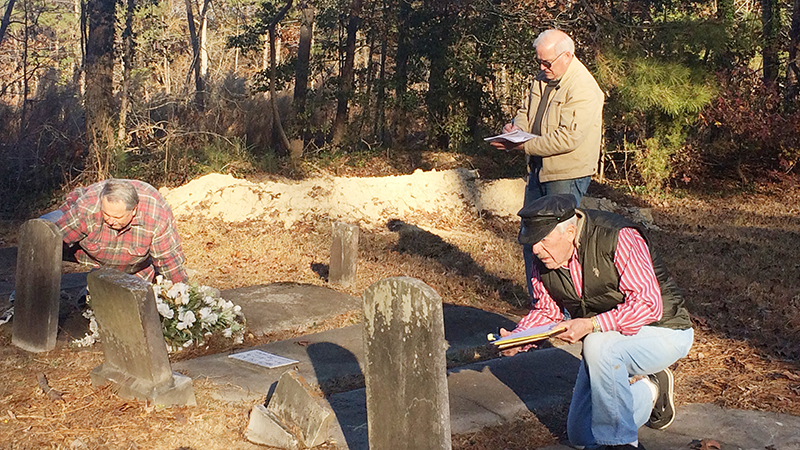 Ernie Powell, in front, with James Hartman and Jeff Stark, are members of the Gravesite Survey Task Force for Isle of Wight County. They were recently at the cemetery for Ebenezer Baptist Church and checking for names. Several markers were revealed after Boy Scout James Denoncourt’s recent project of clearing away overgrown grass, ivy and fallen trees. -- Stephen Cowles | Tidewater News

ISLE OF WIGHT
A cemetery that had previously been recorded has gotten another look after a Boy Scout’s recent project revealed graves that had formerly been hidden by nature.

On the Sunday after Thanksgiving, members of the Gravesite Survey Task Force were walking through the cemetery for Ebenezer African Methodist Episcopal Church, which is located at the intersection of Poor House and Bob White roads. There they were recording what names could be found on markers in recovered territory. With them was James Denoncourt, the Scout who chose to clean up part of the graveyard for his project. Community service of one sort or another is required in the steps to earn the Eagle Scout award.

As previously reported, Denoncourt picked the area, which he had often seen because it’s not far from his home. The teenager was moved by how the graveyard had fallen into disrepair. With the help of his father, brother and a few other people, they cut grass, hacked away at ivy and pulled trees away from the back section of the cemetery; there’s still another tree that needs removal.

Though he couldn’t remember who had the idea for the group, member Ernie Powell said that afternoon it started in 2002 as a project of the Isle of Wight Historical Society. Since then, the task force has charted 220 cemeteries, the most recent being at Little Mill Swamp Road. One of the largest, Powell added, was at Historic St. Luke’s Memorial Park.

Where visible, the names, birth dates and relevant inscriptions are written down and later put online at the organization’s website. He said there are 24,000 entries.

Normally, the group doesn’t go back to chartered territory, such as this one in November 2003, but the exception was made for Denoncourt and his project.

Al Burckard, a fellow researcher, said the group — which included James Hartman and Jeff Stark — was looking for names that might have been missed the first time. Because of the Scout’s work, one of the most unique gravestones uncovered was found to be made of concrete, rather than the traditional granite or marble.

Where names aren’t readily clear, a simple use of shaving cream and a squeegee make the faintest of inscriptions briefly legible.

The foam quickly dissolves, so sometimes another application or two might be needed; none of it eats into the marker because the cream is inert.

To learn more about the task force’s work, visit www.iwchs.com.