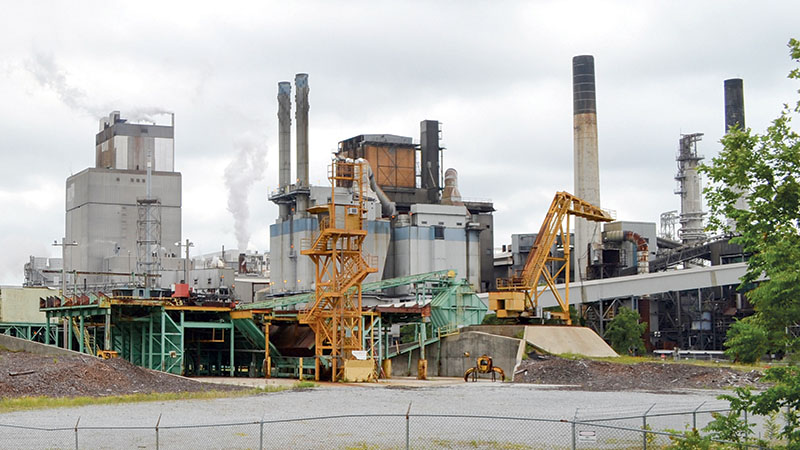 FRANKLIN
The day before Thanksgiving, Franklin resident Priscilla Bynum thought she smelled a gas leak coming from inside her house. When she called the Franklin Fire Department, they had her shut off her gas and evacuate while they searched for the leak, ultimately discovering no breaks in the line, and no obvious cause of the smell permeating the premises.

Then, this past weekend, it happened again, and again officers did not discover any problems with the house’s gas connection. However, based on the time of the second incident, they were able to offer Bynum a better explanation for what might be causing the gas-like smell.

The International Paper mill, located just across the Blackwater River from Bynum’s house, had experienced a bypass of one of its emissions control devices just prior to the fire department’s call from Bynum. Gases were released for only a few minutes, but Bynum said that that was more than enough time for them to reach her house, which is located downwind of the mill.

Bynum also expressed concerns that her frequent exposure to the mill’s gases may have played a role in the chronic vertigo-like symptoms and host of other medical problems she has experienced since moving back to her hometown of Franklin.

“I was born here but I went away for 30 years, and now these things are worse,” Bynum said. “It used to smell like rotten eggs, but now I’ve been back here for 16 years but I didn’t know what I was getting so sick from. I go to my inner ear and throat doctor. I don’t have vertigo [according to my doctor], but I walk like a drunk person and my husband walks worse. I can’t even walk a straight line in my house half the time I’m so sick.

“I have to turn on all the fans in my house just to stay in here. As soon as the door opens, [the gases] blow right in. But, think about the gases that are seeping in but you just don’t smell them. Gas is a silent killer because you don’t smell it all the time. It’s still there in your house. You don’t know it’s there. I think I’m breathing this when I’m sleeping even. We’re breathing this constantly.”

Bynum said that moving to a different neighborhood or city isn’t a feasible option for her and her family.

Bynum contacted David Sellers, a Virginia Department of Environmental Quality air inspector with the Tidewater Regional Office on Monday to report her concerns. According to Sellers, the type of  incident when an industrial plant’s emissions escape containment by various emissions control devices is referred to as a “hiccup.”

“For one minute or two the fumes bypassed the control device and went right into the air,” Sellers said. “They [International Paper] keep a log of when that type of incident occurs so we can go back later and determine whether they are operating the equipment in the right way. If it happens a lot of times, we would go back and say, ‘This isn’t working very well.’

“For paper mills, we try to have thresholds of less than 1 percent of the time [when emissions are not being contained by control devices.] If they’re running at 0.2 percent every month, that’s pretty good.”

When an incident such as the hiccup Bynum reported on Monday occurs, the DEQ requires the source, in this case International Paper, to send a letter or email to the local DEQ office within 14 days of the incident explaining in detail what happened.

According to Jennifer Railey, the communications manager for the Franklin mill, the DEQ deemed the incident a minor event and International Paper was not cited, and remains in full compliance.

“We have a well-documented and strong environmental record with a long history of compliance with local, state and federal environmental regulations,” Railey said. “We also live and work in the area surrounding our mill and take great pride in operating our mill in a safe and environmentally responsible manner.”

Sellers explained that paper mills work by placing wood chips into a cooker, which works just like a pot on the stove, and cook the chips until they break down. Eventually, after several more steps, the resulting pulp is placed onto a roller to make various paper products. One of the emissions control devices that is supposed to be in place during the process is to divert the steam from the cooker to an adjacent boiler that combusts the gases so they are not released into the atmosphere.

He added that most of the emissions with odors the DEQ tracks are volatile organic compounds, which are the result of various chemical processes. The other main type of emissions they track are products of combustion such as boilers and engines.

This tracking is accomplished by issuing an industrial site such as IP a federal operating permit, written and administered at the state level by the DEQ, which specifies federal and state caps on emissions and requires the mill to report its emissions quarterly.

As for the alleged health effects of living near a paper mill, Sellers said that the DEQ’s main job is to minimize the amount of pollutants that are getting into the air, and not necessarily to deal with the potential health effects of emissions. The task of gathering data on rates of various illnesses in Virginia falls to the Virginia Department of Health. He added that the DEQ knows what all the pollutants are, and that it would be a fairly simple matter to request that data from the DEQ and research their effects online.

“Young people are usually the most vulnerable to most pollutants because they are more active than adults, playing outside, so, to me, that’s a high-risk group. Even though an adult might say that he doesn’t consider certain pollutants a problem, it may be for children or for older folks.”

According to an academic paper published by the U.S. Library of Medicine, National Institutes of Health in 2010, one of the potential effects of living near a paper mill may be an increased risk of cancer. The paper’s abstract states that “pulp and paper mills use a variety of chemical substances potentially hazardous to human health. Compounds of both short-and-long-term toxicological significance are found in workplaces, air emissions and water effluent … While the ability to associate specific chemical exposures with cancer outcomes in the large IARC [International Agency for Research on Cancer] multinational cohort may yet help to resolve the status of some of the many chemicals not currently classifiable as to their carcinogenicity by IARC.”

In October, The Tidewater News reported that data from the National Cancer Institute showed Franklin’s cancer rates are currently higher than both state and national averages, and that they have been on the rise since 2009. However, during part of this time period, from late 2009 through mid-2012, International Paper shut down its Franklin mill. The mill later re-opened as a smaller operation to produce fluff pulp.

Bynum’s concerns that she is being exposed to emissions from the mill other than those that have a distinctive odor might still be justified.

“If you’re depending on smell or visible smoke, there’s a lot of pollutants that don’t have those characteristics,” Sellers said. “You’re somewhat dependent on the source keeping good records. Most visible emissions from stacks are low these days. People don’t burn the things they used to like coal.”

However, he added that he personally has not received a complaint regarding the International Paper mill in Franklin in over a year, and that the mill used to operate a lot more equipment than it currently uses.