FRANKLIN
After winning their opening contest of the season over Appomattox Regional 70-21, Franklin High School’s boys’ basketball team, the Broncos, dropped a game to Southampton, but then had a very quick turnaround, playing in a Tip Off Tournament at George Wythe High School in Richmond on Saturday at 10 a.m. against Charles City.

The Broncos were able to wake up quickly and strike big against the Panthers with a stifling defense that led to a final score of 66-35. Three players led the Broncos in double figures and knocked down 16 of 21 free throws on the way to the victory. 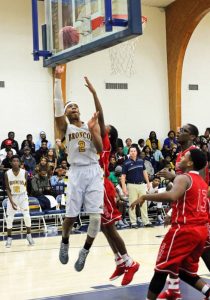 Franklin High Bronco Drelyn Ford releases a jumper in the team’s recent game against Southampton High School. On Saturday, he led all scorers with 15 points and also had 11 rebounds when he and his teammates won 70-21 over Appomattox Regional last Saturday. The Broncos later defeated the Windsor Dukes 62-57. — Frank A. Davis | Tidewater News

“This was the quickest turnaround in all of sports, especially at the high school level,” said the Broncos’ coach, Robby Cutchins. “However the way these young men responded this morning after a huge emotional game like last night and to come out this morning and handle business made me very proud. It was a total team effort!”

For their fourth game in seven days, the Broncos traveled to Windsor for a big conference game and what a battle it was. The Dukes came out on fire, knocking shots down from all over the floor in the first half, and building a lead of 12 points in the first half against the Broncos, holding a 10-point lead at intermission. 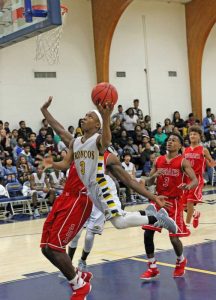 Franklin High School’s Deuntae Jefferson drives to the hoop for a layup in a recent game against Southampton HIgh School. Although the Broncos lost then to the Indians, the next day they quickly turned around and won 70-21 over Appomattox Regional in a Tip Off Tournament at George Wythe High School in Richmond. Jefferson led the Broncos with 19 points and eight assists.

The Broncos outscored the Dukes by 10 in the third quarter to tie the game. The fourth quarter would go back and forth with each team answering each punch by the opposing team, as it was still deadlocked at 50 at the end of regulation.

The Broncos dug deep in overtime to gain control by five points and the Dukes cut it to three with five seconds left before they fouled Deuntae Jefferson to send him to the free throw line with a one-and-one bonus situation.

Jefferson would knock down both free throws to seal the deal and get the victory for the Broncos at 62-57 to move their overall record to (3-1 overall and 2-0 in the conference.)

“First of all, my hat’s off to the Dukes of Windsor; these young men fought extremely hard and got after it the entire game,” Cutchins said. “But again I’m so proud of our young men for being able to battle adversity and pull through. Again this is our fourth game in seven days, so I’m proud to get out of here with a victory. We will get back to work tomorrow night in practice as it wont get any easier as we’ve got a tough stretch ahead of us before the holidays but we are looking forward to the challenge.”

Deuntae Jefferson led the Broncos with 19 points and eight assists. Drelyn Ford had another double double with 12 points and 14 rebounds.

The Broncos will host Park View today with JV tipping off at 5:30 p.m.

ROBBY CUTCHINS is the head basketball coach at Franklin High School. He can be reached by calling the school at 562-5187.