Broncos take one on the chin with loss to Indians 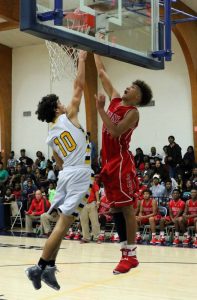 Kee-Sean Carr goes high; he led in scoring with 19 points for the Indians, which won 77-50 against the Franklin Broncos. — Frank A. Davis | Tidewater News

The Indians jumped out with a quick 7-0 lead, but the Broncos fought back to close the score to 12-9 by the end of the first quarter.

The second quarter was the biggest offensive quarter for the Indians as they dropped in 28 points to the Broncos 14 points. For the Indians, Kee-Sean Carr scored 10 points and Darius Bell dropped in 8 points. The Indians took a 40-23 led to the locker room at the end of the first half.

Continuing play in the second half the Broncos fought hard but could not close the gap that the Indians had in scoring.

Broncos head coach Robbie Cutchins remarked after the game, “I was proud on how hard the kids fought. Bottom line, we fought hard for four quarters. At the end of the day they [the Indians] are a very good basketball team. They are quality all the way through with tremendous size. But I was impressed that even with their size the Broncos continued to fight. It was all about heart and determination.”

The Southampton County High School Indians head coach Sharone Bailey commented after the game, “Tonight we had to come out and show our aggression. Full court man is what we play. My guys came out and accepted the challenge tonight and they wanted to play. We attacked the rim. We have a lot of new players and lot of new energy and everybody believes in the system. We came out and did what we are supposed to do. A good win for us.” 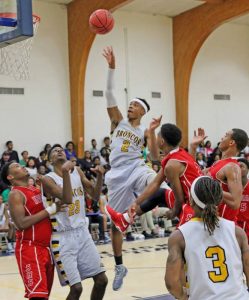 In scoring the Broncos had three players in double figures. Leading was Drelyn Ford with 15 points, Deuntae Jefferson with 12 points and Markeen Tyler with 10 points.

For the Indians they had three players in double figures. They were led by Kee-Sean Carr with 19 points, followed by Darius Bell with 17 points and Amari Long scored 15 points.