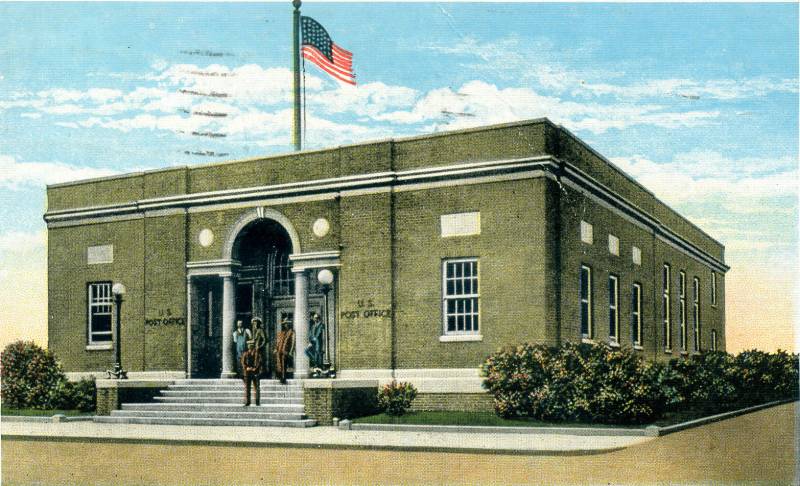 This postcard from 1940 shows the Franklin Post Office, which is today occupied by Manry Rawls Insurance. -- Submitted | Clyde Parker

Bids for a new post office building, to be erected at the northwest corner of North Main Street and Third Avenue in Franklin, were opened on Wednesday by the United States Treasury Department in Washington, D.C. The lot was bought for $5,000 by the Federal Government in 1911. And, two years ago, an appropriation of $45,000 for federal funding was secured by Congressman E.E. Holland.

Mr. Richardson sent a copy of the award letter to “The Tidewater News.” It is reproduced below:

In accordance with Treasury Department approval of your bid proposal, dated November 21, 1916, the lowest received under advertisement, is accepted — to furnish all the labor and materials required for the construction of a new post office in Franklin, Virginia.

Construction is to be in strict accordance with specifications dated October 10, 1916, the drawings, mentioned therein, and such other drawings and models as may be furnished. The specifications for plumbing fixtures, prepared by the board on uniform plumbing for the Treasury, War and Navy Departments, dated March 1, 1916, must be adhered to. The instructions coming from the superintendent to use light colored limestone for all exterior stonework, except where granite is required, must be complied with.

All of the preceding is to be done for the sum of thirty-seven thousand, seven hundred and forty dollars ($37,740.00). The work must be completed within fourteen (14) months of date of this acceptance.

It is understood and agreed that you will execute promptly a formal contract with bond in the sum of eighteen thousand, nine hundred dollars ($18,900) guaranteeing the faithful performance of the work.

Abbit to depart for Norfolk

Mr. John D. Abbitt, president of Merchants and Farmers Bank, and one of Franklin’s best citizens, will leave our town the first of the year to take the presidency of the Mercantile Bank of Norfolk. This news causes general regret here and throughout the County where Mr. Abbitt is widely known and has a large circle of friends.

Mr. Abbitt, a native of Appomattox County, Virginia, the son of the late Dr. W.H. Abbitt, came to Southampton County in 1885 and was connected with the Seaboard Airline Railroad at Handsom for a number of years. Moving to Franklin in 1904, he was elected Cashier of Merchants and Farmers Bank, serving efficiently in that capacity and building up a splendid business for the institution. Since 1913, he has been president of the bank, maintaining his office in the bank building and being actively interested in all of the affairs of the bank here and the flourishing branch in Courtland.

During the time that Mr. Abbitt has been connected with the Merchants and Farmers Bank, it has grown from $20,000 to $41,000 in capital stock and has accumulated a surplus fund in excess of $59,000, with total resources of more than $400,000. As cashier and member of the board of directors and later as president, Mr. Abbitt has contributed largely to the success of this institution and the large patronage which it enjoys.

In addition to his interest in banking, Mr. Abbitt is prominently connected with other businesses enterprises of the town, including the Virginia Buggy Company. He is an active and loyal member of Franklin Baptist Church and takes much interest in all movements for civic betterment.

He served four years on the State Central Democratic Committee as a member from Virginia’s Second District.

The Mercantile Bank is one of Norfolk’s finest banking houses. It has capital and surplus of $415,000, and is making gratifying growth in financial strength and influence in the City of Norfolk. It is located on the corner of Plume Street and Atlantic Street where the Seaboard Bank was located for a number of years.

All soft drink dealers who are advertising in The Tidewater News are hereby notified that Judge J.L. McLemore will sit on December 13, 1916, at Courtland, Virginia to hear applications for soft drink licenses in Southampton County. We are advised by Judge McLemore that all applicants must be present in Courtland in person and must appear before him, accompanied by at least one reputable witness to testify as to the desirability of the applicant as a proper person to dispense soft drinks.

There is no special tax required and it is only necessary for the applicant to appear before Judge McLemore in his Court and make formal application for a license; it will be granted under the restrictions enumerated in the prohibition act. However, the license may be revoked at any time by the Court when it has been satisfied that the law is being violated or the licensee is not the proper person to engage in the soft drink trade.