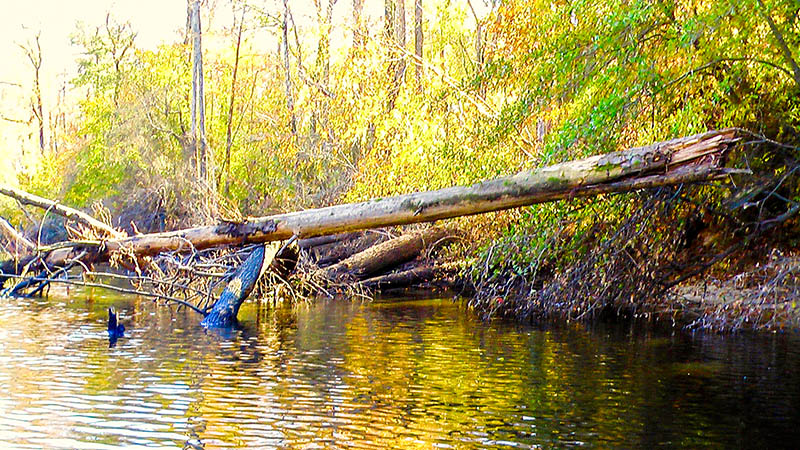 Riverkeeper Jeff Turner described this scene as some of the new fishing structure on the Blackwater River. -- Submitted | Jeff Turner

Spirit of Moonpie and I spent the 20th through the 23rd on the Blackwater below Franklin. The water was very low and 49 degrees. Air temps ranged from 26 to 53 degrees.

Trash is still pretty bad out there from all that high water we had after Hurricane Mathew. A lot of it I cannot reach as it is so high up in the trees.

I ventured pretty far downriver on this trip and was surprised at all the new trees that have fell in the river. Those will provide some nice new places to catch fish from if USACE doesn’t come along again and remove them for the tugboat that hasn’t run in 20 years!

I really didn’t see any water quality issues this trip except that the river is really getting stagnant and that’s pretty odd this time of year.

Speaking of fishin’, I really didn’t do all that great on this trip. I was fishing for Jacks and caught four that were barely big enough to eat. I caught several that were just too small. I think I caught about eight largemouth on this trip; all were very small except one decent 2-pounder.

All fish were caught on a Mepps Minnow or Perch AC Minnow.

I was lucky the first day that my boat didn’t get sunk. I was pulled up to the shore at camp when this boatload of duck hunters came by. They did not go to no wake and that caused my boat to slam into the trees on shore and if I had not already unloaded it, the boat would have taken water over the transom and possibly sank.

I just don’t understand how the operator of a boat would not know that a boat tied up to the woods is going to get slammed into the trees if their boat is throwing a big wake.

So anyway, I’m looking for these guys so I can educate them on the rules and etiquette of running the river.

I saw a little bit of wildlife this trip — a raccoon during the second day late afternoon, a bunch of squirrels, the usual Kingfishers wanting to race the boat, a couple of Great Blue Herring and lots of wood ducks.

I also saw a wild turkey and it did something I have never seen before. I was headed back to camp the second evening, really pushing it ‘cause it was ‘bout dark.

I saw this turkey take off from a tall pine tree and start to fly across the river, I see that all of the time. However, this time the turkey saw us and turned right and started flying downriver … with Moonpie and I.

Moonpie was a hollerin’ “WoooWEEEE, it’s a race ‘tween a land turkey and a river turkey!”

I would normally have whacked her for that comment, but we were going so fast I could not take my hands off the boat controls or my eyes off the river. Here we were, neck-and-neck flying down the river for a good half-mile heat. Finally at a bend in the river the turkey did a crash landing into another tall pine.

I think that turkey knew Thanksgiving was only a couple days away and that’s the reason we had a drag race on one of the two rivers we call the Blackwater and Nottoway.