Jarratt House of 1833 being restored 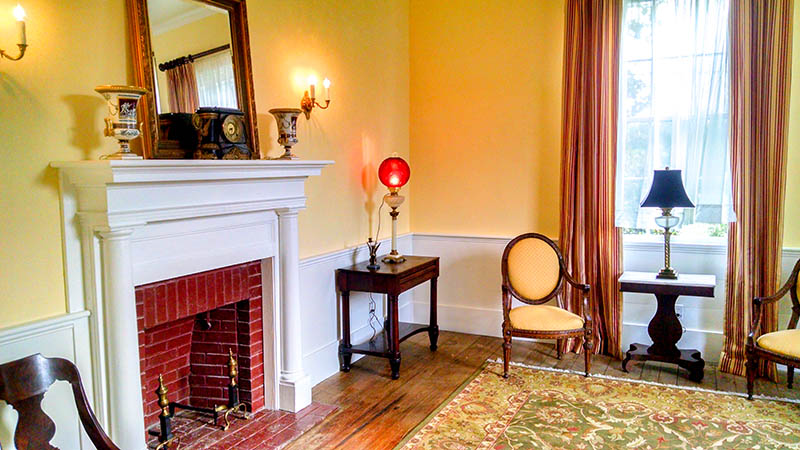 In keeping with the original style, the living room is the most formal room in the house. Over the mantle hangs a 5-by-7 ornate mirror. -- Submitted | Mary Woodruff

JARRATT
The Riparian Woman’s Club of Emporia will once again present the 15th Christmas Home Tour. The tour will be on Friday, Dec. 2 from 4:30 to 8 p.m., and on Saturday, Dec. 3 from 11:30 a.m. to 3:30 p.m. The proceeds will go toward the Community Improvement Project, a two- year project to make the community a better place to live, work and raise a family.

We are excited that guests will have the opportunity to see this home located in the Town of Jarratt.

The Elms, aka the Jarratt House, in Jarratt, was originally built in 1833. Burned by Union soldiers in December 1864, it was rebuilt on the original footprint in 1866. It’s believed that the 14-inch solid brick walls of the first floor survived the fire. The home remained in the Jarratt family until 2012, but had been vacant for several years. It is being restored by Kurt Whitehead of Richmond. He is the son of Thomas and Cecelia Whitehead, who grew up in Greensville County and reside on Lake Gaston.

Whitehead’s family connections to the area are extensive. He is the great-great-grandson of Newitt H. Ferguson; one of five local Confederate men who participated in the Hicksford raid.

As you enter the grounds, there are two large antique iron urns on brick pedestals. The house, surrounded by massive magnolia and pecan trees, is a raised basement Greek Revival style with Italianate details. A basket weave pattern tumbled brick sidewalk leads to the columned porch and second-floor entrance. Since the house is still being renovated, only the 2,000 square foot second floor containing a hallway, living room, three bedrooms, two baths and enclosed rear porch are on the tour. There are pine floors, 12-foot ceilings and three of the four original fireplaces.

The home is furnished primarily with American Empire antiques from 1820s-1860s, Victorian and period reproductions. The walls are hung with antique prints, paintings, portraits and family photos. Throughout the house are many 19th-century items like converted oil lamps, bronze and spelter statues, books, clocks and girandoles.

Upon entering, you will be welcomed into a stately 12-foot by 38-foot hallway that runs from the front to rear of the house.

The dark gray walls are offset by white woodwork, antiques and artwork. Among the antique hallway furniture are pier tables, sofa, chairs and a bookcase housing a collection of books printed in the 1800s and early 1900s.

In keeping with the original style, the living room is the most formal room in the house. Over the mantle hangs a 5-by-7 ornate mirror. There is a 12-light vintage French Empire chandelier. The Empire sofa is upholstered in archival reproduction fabric. Of particular interest are an exceptional antique chair with ormolu mounts and a rosewood marble top cabinet. There is a collection of French ethnography prints from the late 1700s.

The bedrooms are furnished with antique and reproduction beds, marble topped dressers, chests, and other furnishings.

Whitehead travels extensively for both work and leisure. He has acquired many antiques and decorative items on trips throughout the U.S., Europe, India and Central and South America. The house is decorated with fresh and artificial greenery and seasonal décor. In the windows are custom-made Christmas candles. In the hallway is a Christmas tree decorated with ornament that were collected on his travels.

While the home contains 19th-century furniture, it also has fully integrated 21st-century technology. The house uses smart technology for the heating/AC, security and entertainment systems. Using a phone app or accessing a computer allows the owner to adjust heating/AC settings, music, volume and monitor security from any place in the world.

The owner regrets that the first floor containing formal dining room, library, kitchen and pantry are not available for the tour, but he hopes you will return again next year to see the completed home.

The tour will also include the homes of David and Rosemarie Bland; Mike and Dawn Veliky; the Historic Masonic Lodge located in Emporia; the home of Jamie and Robin Rawles of Southampton County (Capron); and Timothy and Stephanie Dunlow of Roanoke Rapids, North Carolina.

Tickets are $13 and are available from Riparian members; the Emporia-Greensville Chamber of Commerce; Paws, Purrs and Hers; the Nottoway House Courtland; or by calling 434-594-4369.