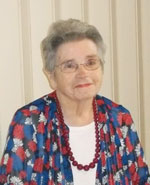 Mrs. Grizzard was a former cafeteria employee at Drewryville School, a former LPN at Camp 20 prison and Greenville Memorial Hospital, and had retired from Grizzard’s Grocery Store in 1986.

The graveside service will be at 11 a.m. on Saturday, Nov. 26, in the Drewryville Cemetery with the Rev. Scott Wasdin officiating.