Tales that grew in the telling

SEDLEY
Anyone who’s ever spent enough time fishing or hunting is bound to have stories to tell. Some can be funny, poignant, reflective or even downright thrilling, depending on the event and, of course, the speaker. In the case of Ash Cutchin, though, he’s put his experiences and observations in book form, “Dog Tails, Fish Tales and Other Misadventures.”

Seven stories have already been published in magazines such as “Shooting Sportsman,” “Gray’s Sporting Journal” and “North Dakota Outdoors.” 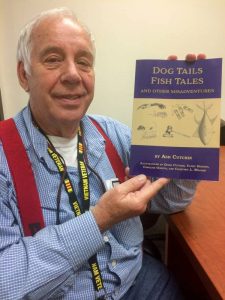 Ash Cutchin shows a copy of his first book, “Dog Tails, Fish Tales and Other Misadventures.” He’ll be at the Farmer’s Market in Downtown Franklin on Saturday to sell and autograph some available copies. — Stephen H. Cowles | Tidewater News

The germ for publishing came about last Thanksgiving when Cutchin and wife Ginna joined with other family members in Hilton Head Island, South Carolina. During that time, some of the grandchildren read aloud his stories. The content evidently impressed the listeners who asked and urged him: “Why don’t you put them in a book?”

To which he said, “But seven stories do not a book make.”

“It’s something I’ve always wanted to do,” Cutchin, 75, said recently. “My family talked me into it.”

Since he had retired earlier this year, the time was his to fulfill that personal accomplishment.

Right on through the holiday season and into February, Cutchin came up with 29 other stories and also got to include the previously published ones for a total of 36.

The book is further enhanced by sketches done by Ginna, their daughter Cathy Gornto, and granddaughters, Caroline Gornto and Courtney L. Weaver. To accommodate his wife so that she would have time for drawing, he took over much of the housework through June.

A publisher was found in Saltwater Media, based in Berlin, Maryland. Although the copy was emailed, the sketches were hand-delivered in late August/early September.

He was dissatisfied with how five drawings turned out, and that matter is being corrected.

Although everyone has stories to tell, not everyone can be a storyteller. Having a strong reading background such as Cutchin obviously has helped him.

He credits Lizzie Mae Cutchin, a librarian of 53 years, for that gift.

“She taught me to love books and to love reading,” he said. Having studied English in college and taken creative writing classes at the College of William and Mary added to his skill.

Other inspiration came from writers Robert Ruark, Jack Samson, George Berger and “more than anyone else, Gene Hill. All these people inspired me,” Cutchin said.

With all the stories available, he does have some that are closer to his heart than others.

He said that “Dot,” the story of a bird dog, is his favorite in the book.

Another is “A Certain Place,” which first appeared in the North Dakota publication.

Cutchin will be available to sign copies of his book at the Downtown Christmas Open House on Saturday, Nov. 19, from 10 a.m. to 5 p.m. He will also autograph copies at the Walter Cecil Rawls Library in Courtland on Saturday, Dec. 10.