FRANKLIN — Janet Drake Carter Hudgins passed away quietly at her home on Nov. 14, 2016, after a long confinement. 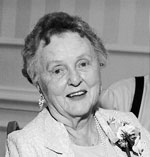 Born in Leesburg, Virginia, she was the youngest in the family of seven children raised by Paul Haynes and Mary Drake Carter.

She attended Mary Washington College before returning to Leesburg to accept a job as a legal secretary as World War II drew to a close. While working as a volunteer in the Leesburg Baptist Church, she met Maj. Ira D. Hudgins, the church’s new minister and a chaplain just returned from Japan at the end of the war. Following their marriage, the couple lived in Kennett Square, Pennsylvania, for two years before moving in 1951 to Franklin, where she lived for the rest of her life.

Mother of four sons and a superb homemaker in an era when that was a high calling, she later worked for the City of Franklin Social Services Division and Union-Camp Corp.

Long active in the life and work of Franklin Baptist Church, especially as a Sunday School teacher and its women’s circles, she was her husband’s indispensable partner during his 35-year ministry with the church.

A voracious reader, she was a member of the Franklin Book Club and proud of the intellectual stimulation that group provided and for its century-long link to progressive traditions.

Her quilting circle connected her to skills she learned in childhood and to friends whose conversation she valued.

She was active in the Garden Club of Virginia until confined to bed in the last year of her life, but even then continued her lifelong passion for her garden. The yards, beds and borders she tended were populated with plants given, exchanged and traded with family and friends and were not only her great joy, but also a catalog of friendships and family connections that stretched back to her childhood.

The memorial service will be at 11 a.m. on Saturday, Nov. 19, in Franklin Baptist Church with the Rev. Steve Gibson and Wayne Blythe officiating. Burial will be private.

Memorial contributions may be sent to Franklin Baptist Church, the Garden Club of Virginia or the Ruth Camp Campbell Memorial Branch of the Blackwater Regional Library.