FRANKLIN
The Southampton Animal Control is looking for both the owner of an injured dog, as well whoever recently shot the animal. 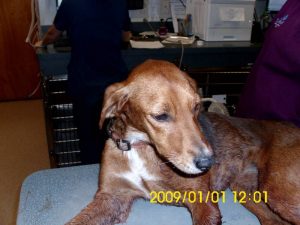 Southampton Animal Control is looking for the owner of this dog. The animal was injured by gunfire in its left front paw, which had to be amputated. The agency is also looking for whoever fired the shot.

Maj. Gene Drewery, spokesman for the Southampton County Sheriff’s Office, said that on Tuesday at approximately 4 p.m., the department got a complaint of someone shooting a deer. He added that the caller also stated a dog had been injured by the gunfire. This reportedly occurred in the area of Monroe Road near Crater Drive.

“The animal was located and transported by Southampton Animal Control to an after-hours veterinarian in Chesapeake to be treated,” Drewery stated in a press release on Thursday afternoon. “Unfortunately, the dog’s front left leg that was shot had to be amputated.”

He added that dog is still being treated at the Chesapeake facility. Arrangements are being made for a foster home to care for it.