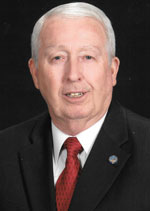 He was born in Isle of Wight County, Virginia, to the late Samuel L. Jones Jr. and Annie E. Wells Jones, and was predeceased by his daughter, Jennifer J. Gore.
Buck is survived by his loving and devoted wife of 54 years, Carolyn R. Jones; son, William F. Jones and fiancée, Amy Hughes, of Zuni, Virginia; daughter, Patricia J. and husband, retired Air Force Lt. Col. Richard Vaught of Brussels, Belgium; loving grandchildren, Ethan and Ava Jones, Chase and Austin Gore, and Chelsea and Whitlee Hughes; brother, retired Air Force Maj. James “Fuzzy” and Carol Jones of The Villages, Florida; sister, Carolyn and husband, Dr. Lawrence Kyle, of Blacksburg, Virginia; and numerous nieces, nephews, cousins and extended family.
Buck was a pillar of the Windsor community, known for his word of honor and integrity. A graduate of Windsor High School, he and his wife started and managed W.L. Jones Electric & Plumbing Co. for over 42 years.
Buck was a member of the Windsor Town Council for many years, also serving as vice mayor. He was an active member of the Windsor Congregational Christian Church for decades. Buck coached little league baseball for a dedicated number of years and served as commissioner of the Windsor Athletic Association. He was also a lifelong member of the Windsor Volunteer Fire Dept. and Orbit and Zuni Hunt Clubs.
Buck was well known as a fair and charitable man, who touched the lives of many people throughout his life.
Despite humble beginnings, Buck and Carolyn shared many adventures. They traveled to Alaska, Hawaii, most of the U.S. numerous times, had great times on Caribbean cruises and multiple European trips.
The family is deeply grateful for the love and support shown by the community during this sad time.
His service will be at 6 p.m. on Thursday, Nov. 17, in Windsor Congregational Christian Church, Windsor, with the Revs. Chuck Willman and “Buzz” Ballard officiating.
In lieu of flowers, donations may be sent to the American Diabetes Association or Windsor Volunteer Fire Department.
Condolences may be posted on www.parrfuneralhome.com.