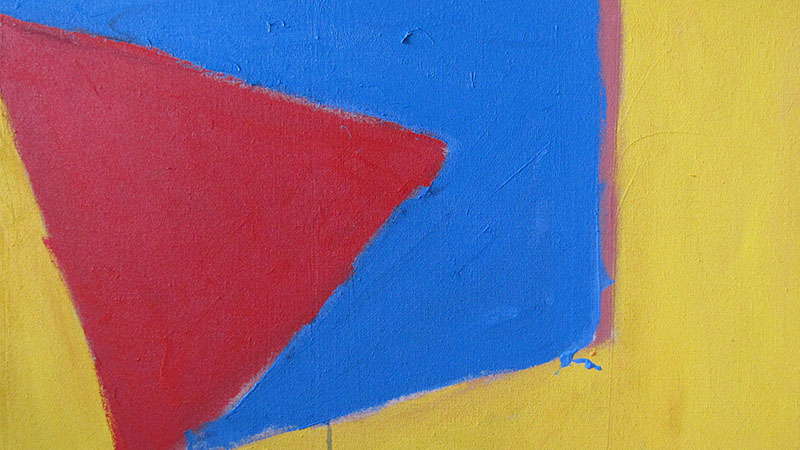 “Wedge” by Vittorio Colaizzi will be among the art featured in “New Works x3,” which begins on Friday, Nov. 18, at the Rawls Arts Museum in Courtland. -- SUBMITTED

COURTLAND
The Walter Cecil Rawls Library and Museum in Courtland will host a new show displaying the works of three acclaimed painters beginning Friday, Nov. 18, with an opening reception featuring live music by Kevin and Jason and a holiday trunk show 6:30 to 8 p.m.

Henry-Choisser received her master of fine arts degree in painting from the University of North Carolina in Greensboro and her bachelor of arts in studio art from Lawrence University in Appleton, WI. She is a current board member of the 1708 Gallery in Richmond and serves on the board development and nominating committees.

“There are particular moments which temporarily illuminate the underlying complexities of life,” Henry Choisser said when describing her work. “They occur in thought, dreams, intereaction and day-to-day experience. The challenge of re-creating, either symbolically or representationally, the images associated with these moments is what compels me to paint.”

Don Crow is a painter, collage artist and assistant professor at VCU-Q in Doha, Qatar, where he teaches design and foundation courses. He has been awarded numerous grants and distinctions, including the Pollak Award for Excellence in the Visual Arts, as well as inclusion in the Virginia Museum Exhibition “Un/Common Ground.” His work has been displayed at Reynolds Galler, 1708 Gallery and Plant Zero, as well as other venues.

Over the years, Crow has worked in large-scale oil on canvas, painted paper collage and watercolor drawings, all influenced by his training in abstract expressionism.

In addition to being an artist, Colaizzi has produced publications on Robert Ryman, including his forthcoming publication “Robert Ryman and Abstract Pictures, Phaidon.”

Colaizzi uses geometry intuitively, highlighting a deliberately rough technique and unrefined materials. The paintings remain seemingly unfinished and are less about shapes than energy and relationships.

The show will run from Nov. 18 through Jan. 6, with gallery hours Wednesday through Friday from 10 a.m. to 5 p.m. and Saturdays and Tuesdays from 1 to 5 p.m. The opening reception will be free and open to the public.

The Rawls Museum is a partner of the Virignia Museum of Fine Arts. More information on the show can be obtained at www.rawlsarts.com.

LEIGH ANNE CHAMBERS is the executive director of Rawls Museum Arts. She can be reached at 653-0754 or by emailing leighanne@rawlsarts.com.