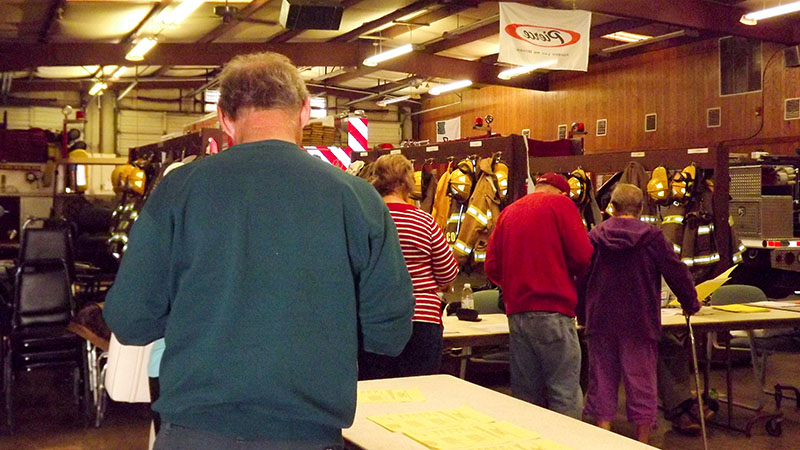 Voters in Courtland wait their turn to give their identification and receive their ballots at the fire station on Main Street. -- Stephen H. Cowles | Tidewater News

HUNTERDALE
Gina Walker was not optimistic while standing in line to vote on Tuesday at Bethel Friends Meeting House.

Asked not for whom she voted, but whether her candidate has a good chance of winning, she said, “Not really. I wish we had another candidate. I’ll pick the best of the two evils.”

Outside after voting, though, James Worrell said he does feel good about his candidate of choice.

Peggy Davis, registrar for Southampton County, said late in the afternoon that voting has been “pretty heavy.” There were no numbers immediately available, but from what’s been reported to her by polling stations, there’s been “a big turnout.”

On the ballot was the choice of five presidential candidates, the top two being Republican nominee Donald Trump and the Democrats’ Hillary Clinton. Three other candidates were for a Green Party, an independent and libertarian.

Robert C. “Bobby” Scott, a Democrat, and M.L. “Marty” Williams, a Republican, were on the ballot for the 3rd District of the House of Representatives.

Voters were also asked if they wanted the state constitution to allow amends concerning employers and labor unions and whether to grant property tax relief to the spouses of first responders killed in the line of duty.

COURTLAND
In the fire station, poll worker Debbie Puckett said the line was snaking around and out the door from 6 to 9:30 a.m. She figured that already 25 percent of the registered voters had shown up by then.

Puckett’s been helping with voting since 2009; it’s something she’s always wanted to do, but waited until retirement to devote her time.

Outside the poll, Pat Hartman was doing an exit poll of her as she stood holding signs in support of her candidate, Donald Trump.

“Neck-and-neck” is how she predicted the race, adding that media, Democrats and the RHINOS (Republicans in Name Only) have been a factor against him.

“He’s not owned by one. He’s self-funded,” Hartman said. “He’s for the country, not the party.”

She believes Trump will work to clean up corruption, strengthen the military and deal with border control.

Hartman added that he has a strong family and is a “fine example of hard-working Americans.”

“He didn’t need to do this (run for president),” she continued. “He’s a patriotic person.”

WALTERS
“We’ve had a good group since this morning,” said Chandra Christmas in the mid-afternoon at the Walters Ruritan Clubhouse. ‘We’re looking for things to pick up around 5 to 6 p.m.”

The poll worker added, “We’re well over half of what we usually get.”

In consideration of press time, this year The Tidewater News chose not to wait until all the election results were called in. Instead, the paper will report the the numbers after the registrars have canvassed the totals to officiate the results.