Lady Indians ‘played their hearts out’ at Tabb 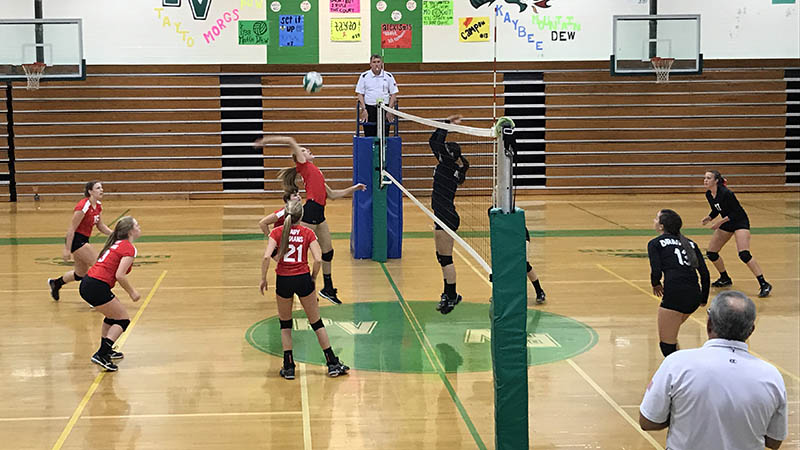 Though victorious against Park View (shown), the Lady Indians were defeated by Warhill last week, and then by Tabb on Monday. -- Submitted | Amy Davis

We had a fantastic season and went further this year than Southampton volleyball has ever gone. Emma Drake ended the season with 340 kills and 36 kills in one game, both of which are school records.  Several of our girls were named on the All Conference 25 team. Emma Drake and Sarah Williams were both first team selections, Ashlyn Edwards was second team, and Hannah Bradshaw and Madison Wright were honorable mention.

From Thursday, Nov. 3
WILLIAMSBURG
Tonight the Lady Indians did not pull out the victory against a tough Warhill team. Warhill is the defending 3A state champions, so the girls knew going into that we would have our work cut out for us.

We lost in three sets 13-25, 16-25, and 14-25. We had moments where the set was neck-and-neck, but in the end we just didn’t have enough to get the victory tonight. Although we would have liked to have been the conference 25 tournament champs, we are glad to have had the opportunity to compete.

We have already put the loss behind us and are focusing on our regional match up against Tabb on Monday.

Standouts from the game Jamey Bunn with 9 assists and 2 aces, and Emma Drake with 14 kills and 11 digs.

From Wednesday, Nov. 2
South Hill
The Lady Indians volleyball team defeated Park View in 5 sets tonight. The scores were 16-25, 25-22, 17-25, 25-23, 16-14. Exciting doesn’t even begin to describe the game. Both teams played their hearts out. We started out very slow but came out strong in the 2nd game and went back flat in the 3rd set. We fought hard in the last two sets to get the victory. I am incredibly proud of each one of the girls on my team. I told the girls before the match, volleyball is just a game. It’s up to you what kind of game it will be. Let’s not make it be our last game because this is our game. They definitely lived up to the challenge and pulled off a big win that puts us in the conference tournament and guarantees us a spot in the regional tournament next week.

Senior captain Sarah Williams said about tonight’s win: “I have never been so happy to win a game in my career. Our team fought and played so hard. We worked together tonight better than we ever have and I am so proud of us for coming this far. I hope we can continue winning throughout regionals and keep our season going.”

Junior captain Emma Drake said, “Tonight we definitely left everything on the court. Playing a competitive team like Park View not only prepares us for regionals but shows that we can compete with tough teams.

We couldn’t have had that win without the tremendous support we had during the game and leading up to the game. Looking forward to what is in store for us this upcoming week.”