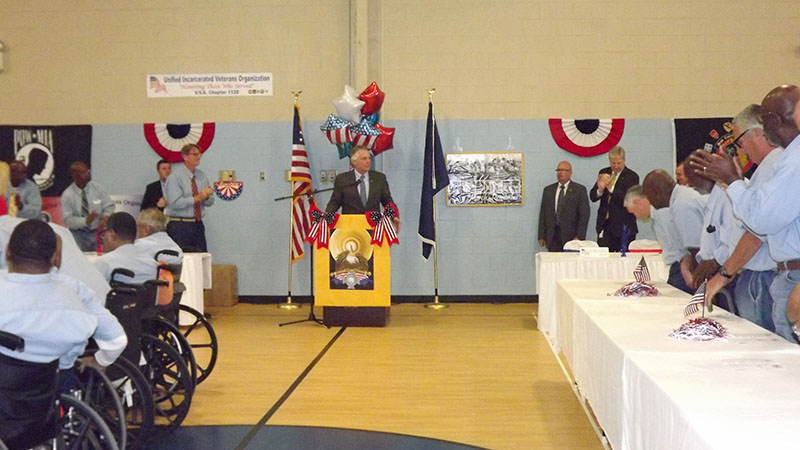 CAPRON
Gov. Terry McAuliffe spoke to inmates at the Deerfield Correctional Center in Capron on Friday during the prison’s annual veterans’ banquet, held in honor of inmates who have served in the Armed Forces.

McAuliffe spoke of his recent efforts to restore voting rights to convicted felons who have served their time, and how the Commonwealth had greatly reduced veteran homelessness with the establishment of the 211 health and human services hotline before taking the time to meet with individual inmates and prison staff members.

This was the fourth annual banquet the prison has held for its veteran inmates. According to Deerfield’s communications specialist, George Sisson, approximately 200 inmates out of the prison’s population of 1,060 are veterans, 130 of which are members of the prison’s veterans’ program. The program is designed to help veteran inmates reintegrate into society upon their release and to educate them on their benefits.

“All these guys have served, and they’ve served proudly,” Sisson said.

Sisson added that the reason Deerfield has such a large veteran population is because the prison caters to geriatric inmates, many of whom served during the Vietnam era.

Not all inmates are geriatric, however, and the average age of an offender at Deerfield is 55.

Another accomplishment of the prison’s veterans’ program that was celebrated during the banquet was the prisoners’ efforts to collect soda tabs for the Ronald McDonald House, which uses them to provide funds for children in need of surgery and lodging for their parents at a rate of 1,000 tabs per child. The veterans of Deerfield have collected a total of 300,000 tabs over the past three years.

According to Reginald Ponton, Deerfield’s chief of housing and programs, the prison includes a variety of programs for veterans and non-veterans alike, designed to minimize recidivism and help inmates reintegrate with society upon their release. These programs include a substance abuse program, a “ready to work” program, and “resources for successful living.” The prison also offers educational programs including a GED program, and workforce training programs in business computer applications, electricity and horticulture.

Ponton added that the prison’s population includes both violent and non-violent offenders. However, a majority of the violent offenders housed at Deerfield are there because they require 24-hour geriatric care.

According to the Virginia Department of Corrections’ website, Deerfield is classified as a level two security prison, which is a lower security facility.

Assignment criteria for inmates include no escape history within the past five years, single life sentences having reached their parole eligibility date, and no disruptive behavior for at least the past 24 months prior to consideration for a transfer to any less-secure facility. 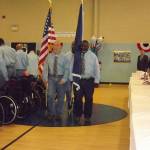 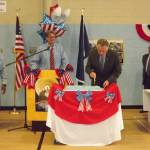 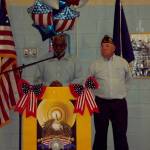 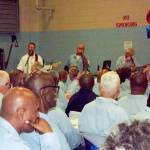 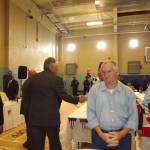