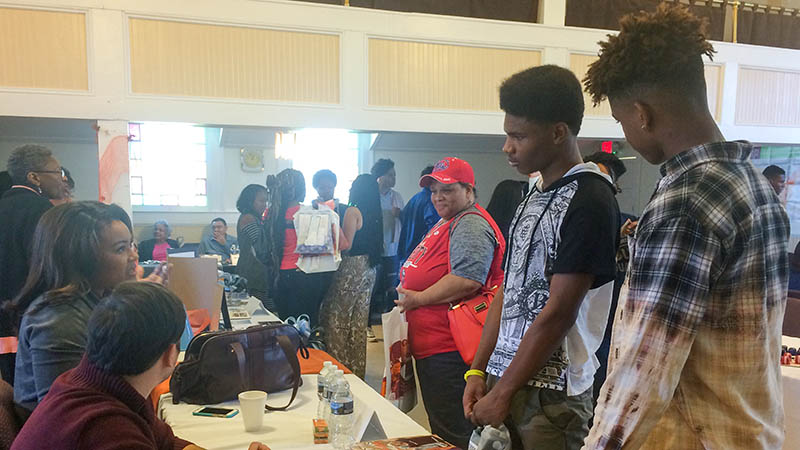 BOYKINS
The former Shiloh Baptist Church sanctuary was the scene of a different kind of fellowship last Sunday. The hall doubled as a meeting place for students, parents and representatives of higher education in the College Fair.

Latorial Faison, who helped to organize the inaugural event, has been pleased by the turnout.

“It really exceeded our expectations,” she said. “Over 113 students signed in, but I know we definitely saw more than them.”

Getting the news out to middle and high school students about opportunities was part of the motivation for organizing the event.

One attendee was overheard to say, “I think this has been phenomenal.”

Faison continued, “One of the reasons [for having the College Fair] was that, growing up in this area, most of the students know about only a few colleges within a 50- to 100-mile radius.”

In the making for six to seven weeks, the activity drew in representatives from colleges and universities much further away, such as Livingstone College in Salisbury, North Carolina. Those institutions of higher learning that could not attend personally, sent brochures and displays. The famed Tuskegee University in Alabama was such an example.

In addition to the schools themselves, information was available on scholarships.

Faison mentioned the students and parents learned about completing one application that could be sent to several different schools via www.commonapp.org.

Another is www.questbridge.com, which connects “high-achieving, deserving students with educational and scholarship opportunities at leading U.S. colleges and universities.

The armed forces were also represented in part by Faison’s husband, Army Lt. Col. Carl J. Faison, who is a son of Southampton Supervisor Carl Faison and the Rev. Dr. Lillie Faison, pastor of the church. The latter said she’s also a product of higher learning, having earned a master’s degree in English education at Hampton University, and divinity degrees from Virginia Union University and Regent University.

Latorial Faison added, “We got lots of positive feedback, and hope to return bigger and better next year.”